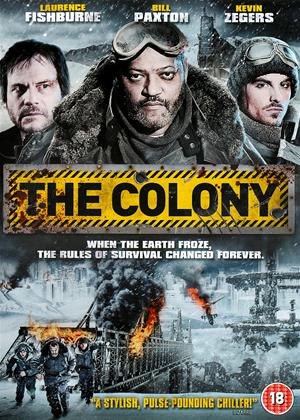 Synopsis:
Forced underground after the planet is plunged the next ice-age, the inhabitants of Colony 7 struggle to survive below the world's frozen surface. When they mysteriously lose contact with the only other remaining settlement, Briggs (Laurence Fishburne) decides to lead a dangerous mission into the frozen wasteland determined to discover their fate. Upon arrival the team discover a savage and desolate place with a threat much worse than anything they've encountered before. If Briggs and his team are to ensure the continued existence of his colony then they must battle to save themselves and protect their fellow colonists in what might be humanity's last stand.
Actors:
Kevin Zegers, Laurence Fishburne, Bill Paxton, Charlotte Sullivan, Dru Viergever, Atticus Mitchell, John Tench, Lisa Berry, Lucius Hoyos, Kimberly-Sue Murray, Michael Mando, Helen Taylor, Romano Orzari, John Healy, Kristin Shepherd, Sten Eirik, Julian Richings, Alex Paxton-Beesley, Eric Murdoch, Mitchell Nye
Directors:
Jeff Renfroe
Producers:
Paul Barkin, Matthew Cervi, Pierre Even, Mari-Claude Poulin
Writers:
Jeff Renfroe, Svet Rouskov
Studio:
Momentum Pictures
Genres:
Sci-Fi & Fantasy
Countries:
Canada

Reviews of The Colony

A small and surprisingly quiet movie The Colony is a post-apocalyptic indie horror set in a world where humanity is struggling to survive in a second ice age which has left the world above ground uninhabitable.

Starring Laurence Fishburne as the leader of a small (three measly people) military task force charged with protected Colony #7 the film begins by setting up the world in which humanity is now struggling to survive. Growing food underground there is a significant lack of meat around for this particular society, or for most of them – there are a few it seems who are willing to turn to cannibalism in order to survive. After receiving a distress call from the nearby Colony #5 Fishburne and two companions, Mason (Bill Paxton) and Sam (Kevin Zegers) venture out of the relative safety of their own Colony to investigate.

When the arrive at Colony #5 they are greeted by severe destruction and a lot of blood and gore, not only has the Colony been attacked by a band of cannibals but it has also incurred a landslide or structural collapse of some kind, leaving those who were not already being butchered by the cannibals to die at the mercy of their surroundings.

For horror fans there are a handful of truly gory and gross moments that ought to whet the appetite – perhaps a poor choice of words?

Yet for those looking for something a bit more the Colony has a few too many failings to ignore: in places the small budget of $16 million is clearly apparent where the CGI or set construction is just not quite up to standard, choosing to capture the aerial shots of Colony #7 are clearly models, which contrast against some of the very well done CGI that appears later in the film – leaving the film as a whole feeling somewhat visually disjointed.

Secondly there are a number of rather glaring plot holes, most notably the sudden increase and decrease in cannibals throughout the film; as they track Sam and his comrades back to their colony their small number works in the favour, making it easy for them to be less conspicuous, yet later on they are able to wreak massive devastation as they storm a bridge in the masses, significantly outnumbering their opponents. With absolutely no explanation given for such events in the narrative it simply winds up looking like poor showmanship on the part of the director, Jeff Renfroe.