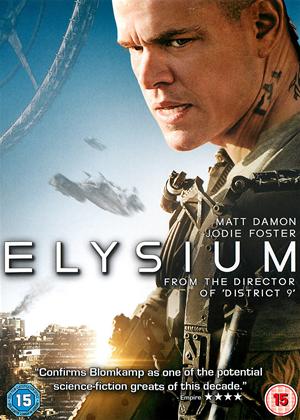 The hype around this film leads one to expect something a bit different, but unfortunately it does not live up to its promise.

The intertwining story of Frey and Max is sloppy in two different senses of the word: it is poorly written and overly sentimental. Typical Hollywood fare really as the outcome is entirely predictable. Neither of these characters is likeable, the viewer has no empathy for them and does not really care what happens to them.

The action parts are extreme and sometime quite nasty, unnecessarily so as we can easily understand the difficulties of trying to get to Elysium without having to experience this nastiness.

The Jodie Foster character is robotic and not a real villain and not likeable either. So one does not know quite what to make of her.

I expect that film goers who like action, violence and lots of swearing in their films will fine plenty to enjoy, but for me it all was rather a waste of time.

Elysium (2013) - Not a classic of the future, but definitely worth a least one viewing - Elysium review by CP Customer

Syfy/Action movie fans will like this. Not a classic of the future, but definitely worth a least one viewing. The action sequences were of a good standard, as was the acting. For me the chief "baddie" gave the best performance and the special effects were well executed. If anything let it down, it was the script (not enough depth). Personally would I watch it again? Yes - if it was being shown on one of the TV channels, but I wouldn't pay to do so again.

By no means a classic but definitely worth watching at least once. This is relatively fast paced and holds your attention without being entirely vacuous. One for the family if you're INA kick ass kind of mood.

Rust in the dust - Elysium review by pw

Enjoyed it but not a repeater. I like Matt Damon but not sure he was entirely convincing as a reformed bad guy. At times he looked like he had just mistakenly wandered (with his usual stiff gait) into the ghetto straight from a fundraising lunch with George Clooney in Beverly Hills.

A very strange turn from Jodie Foster as well. A previous reviewer mentioned she was robotic and I thought she might actually be playing a robot for much of the film. She seemed to be saying her lines through gritted teeth as if someone was pointing a gun at her off-camera (perhaps they were). I think her final words were "no more" and she looked like she meant it.

The gun (and sword) toting baddies introduced some fun (and some ham) but it all ended up a bit predictably.

I thought it was actually well directed by Blomkamp who combines dust and robots well but it wasn't a patch on District 9. Would like to see him direct a Judge Dredd film though. Robots, mutants and Dredd in the Cursed Earth. That would be perfect!

One of the films missed at cinema

think would be better seen on bigger screen

Not a good as District 9

Matt Damon has star quality in an otherwise a rather poor film. Apart from some nice sets has a tired and unsubtle plot.

I was drawn to this film by the prospect of watching Jodie Foster acting with Matt Damon. They do not actually meet. Jodie's character is OK but not impressive Damon is great and you do feel his pain and sorrow though the final scene was perhaps not as emotional as it could have been. The Sci-Fi was too imaginary, I prefer it a bit more real. There are some plot jumps and leaps of faith, altogether too much fighting and not enough character.

Director Neill Blomkamp surprised everyone in 2009 with his debut sci-fi tale, District 9. It was such a fresh and original concept with impressive visuals on a rather low budget. After witnessing his work, I was all for Blomkamp making more movies as were the producers based on the acclaim. However, sometimes you need to be careful with what you wish for. Elysium isn’t quite the horrific result of an ironic Wishmaster-esque request, but it certainly proves that Blomkamp isn’t an infallible writer/director.

Essentially, this is a gorgeous looking dystopian tale of rich-versus-poor. Earth is now a polluted planet of overpopulation and poverty, policed by robots that do everything from hassle citizens to determining parole. The wealthy elite has fled to the off-world colony of Elysium, which resembles the circular structures from the Halo video games almost exactly. Not only do they live the high life of an artificial paradise in lavish mansions, but they also enjoy the benefits of miracle healthcare machines that can cure everything from cancer to polio within a few seconds.

This naturally attracts many planet hoppers that are promptly shot down or deported back to the planet by order of the shrill Secretary Delacourt (Jodie Foster). One of the unlucky inhabitants of Earth is Max (Matt Damon), a robot factory worker on parole that unfortunately ends up with radiation poisoning on the job. With a few days to live, Max volunteers to don some cybernetic braces and attempts to infiltrate his way into Elysium with nothing to lose. His actions are soon taken notice of by the higher-ups and mercenary Kruger (Sharlto Copley) who chases Max throughout the film liked a crazed Aussie huntsman.

I’d hate to think of Blomkamp as a one-trick pony, but Elysium repeats several elements from his previous film and not as well. The gritty wastelands of Earth resemble the African setting of District 9 as do several scenes from the ground-to-air assault to the futuristic weapons that make bodies literally explode. It feels as though the producers ordered Blomkamp to make something almost exactly like his 2009 hit, but water it down for a more mainstream audience in hopes of increasing ticket sales. This includes making the story and characters as far from subtle as possible. As a matter of fact, this may be one of the most blatant tales of class warfare I’ve seen in quite some time.

Thankfully, the one area Blomkamp excels in the one area that he delivers the best: the visual direction. Everything from the set design to the robots and spaceships are top-notch and well-utilized. I never once felt bombarded by special effects, but still appreciated the craft of what was presented. At times it almost feels underused just for how stunning everything is rendered. Blomkamp does such an exceptional job in this arena that’s it’s very disheartening how he directs the actors that fill these beautiful shots. Matt Damon does his best for this type of hero, but Jodie Foster brings in a confusing accent while Sharlto Copley hams his up a little too much.

I was expecting more from such a new and creative director. What he turns in is a movie with awkward acting, a blatant allegory and a confusing story littered with various plot holes. If it weren’t for Neill Blomkamp’s flair for brutal action sequences and visually appealing designs, this would’ve been just another mindless sci-fi blockbuster. My advice to Blomkamp: keep directing stellar films, but hire a writer. With a better script, he’ll be capable of helming some of the best science fiction films ever made.