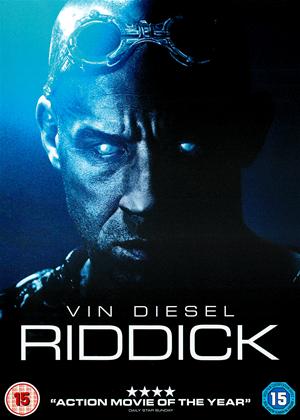 Vin Diesel doing what he does best - Riddick. A must for all fans of the - oh! I have no doubt the critics will carve it up by comparing it to the other Riddick films, but trust me, take it for what it is - a good old kick ass sci-fi........ enjoy it and then wait for another to be made..........

Vin it up - Riddick review by NC

Riddick 3 effectively. Similar format, so if a fan of 1 and 2 will be pleased..and vice versa. Still reminds me of Telly Savalas with muscles...........wonder if they ever re-do Kojak? Vin with a lolly pop probably work........

Vin Diesel returns as the seemingly unstoppable Riddick, the last survivor of a warrior race with penchant for swift and brutal assassination, in the third live action film of the Riddick series.

Left for dead on a sun-scorched planet, Riddick finds himself up against an alien race of predators. Activating an emergency beacon alerts two ships: one carrying a new breed of mercenary, the other captained by a man from Riddick's past.

Beyond this brief synopsis and a cursory understanding of the earlier Riddick movies there isn’t really a great deal one needs to know about this particular film; with all the… “charm” of your average macho-hero Riddick storms through his own narrative leaving a trail of thoroughly beaten bodies behind him. It’s quite nice to see Battlestar Galactica’s Katee Sackhoff on screen again, though her character lacks any real imagination or motivation, whilst the way in which the back story that links Sackhoff’s character Dahl to Riddick is told in a rather clumsy and stunted manner.

All in all, for those who have enjoyed the franchise thus far then Riddick is likely to entertain you as much as it’s earlier counterparts, for those of us who find such fare abhorrent, there is very little salvation on offer here.