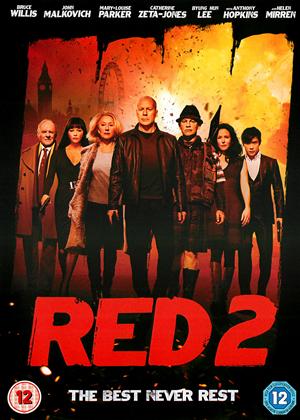 For fans of the actors and actresses in this movie you can't go wrong. If you want a serious spy/thriller type movie don't get this film. If you want action/stunt packed tongue in cheek easy to watch entertainment for a cold winter's night in front of telly with a pizza and tinny then this is one for you.

A film starring Bruce Willis very much in the Die Hard mold. He seems invincible even although he is old and retired, not very realistic. Very much in the Bourne type of film, but not nearly so good. Lots of action, good special effects, but just another action film with nothing which makes it stand out.

Bruce Willis has become his own genre. Very funny, machismo, super hero spy / detective in a feel good (leave your brain at the door) escapist high budget film. Lots of explosions, lots of funny bits. There are plenty of films that try to do this combination but for me they underestimate how difficult it is to do well. Malkovich, Hopkins and Mirren give it that touch of class to make Willis work his magic.

Malkovich is just great presence all the way through. Bruce does Die Hard with a bit more humour. Fun film despite Helen finding the guns heavy, even though are prob fibreglass..............

Surprisingly Red 2 is an improvement on its predecessor, the 2009 sleeper hit about Retired and Extremely Dangerous secret agents, thanks to a better grasp of the inherent comedy in what is happening around them. The film follows Frank Moses (Bruce Willis) and his girlfriend Sarah (Mary Louise Parker) as they are once again dragged into an international conspiracy by Marvin (John Malkovich) and are hunted as they try to uncover why they are being chased this time.

While it does steal elements from the original (It’s plot is surprisingly similar), Red 2 makes up its mind as to whether its a comedy or an action film early on and sticks with it. While Red had trouble finding balance between the two, the sequel just tries to make you laugh and it does an excellent job at it too. It’s a hoot in every sense of the word.

It’s clear that Willis and co are having a hell of a time telling this story as they are all give superb tongue in cheek performances, especially Parker whose role has been beefed up. It’s a film concerned with progressing the many relationships of these eccentric characters while lightly ribbing the stereotypical idea of the modern action movie.

As satire its not scathing but its interesting enough to add another aspect to the comedy. The main draw of Red 2 is the little things, the quirky gadgets, the subverted relationship cliches and Marvin’s increasingly elaborate outfits (his take on the western gunslinger is particularly hilarious). It’s a film designed to make you laugh but most of all smile as the film takes some playful turns.

Ultimately it’s not game changing cinema but then again that kind of film always lacks the main draw of a movie experience, it lacks any sense of fun and thats what Red 2 is, its outrageous fun.