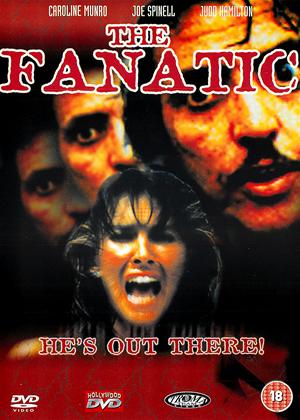 Synopsis:
Joe Spinnel plays Vinny, a cab driver with dreams of being a major Hollywood producer. Determined to have Jenna Bates (Caroline Munro) star in his first film, Vinny follows her to the Cannes Film Festival where she's busy promoting her latest horror flick. He becomes obsessed with Jenna. He becomes Fanatic! Once in Cannes, Fanatic begins to reveal the dangerous and deadly side of obsession and the stalking begins! The suspense and eroticism in "The Last Horror Film" are surpassed only by its blood-chilling horror as this Hollywood scream-queen learns about true fear and paranoia.
The cabbie/wanna-be producer fixates on his "leading lady" and he'll do anything to get her! First Jenna's entourage is murdered one by one. Then bodies begin to disappear. Even worse, when Jenna calls the cops to investigate they begin to doubt her. Could it be a publicity stunt for her next movie? Or else has her mad stalker finally gone over the edge? Who else will get in the Fantic's path on his way to have Jenna, and when will the carnage in Cannes end?
Actors:
J'Len Winters, John Kelly, Joe Spinell, Simone Overman, Malgosia Casey, Patty Salier, Chip Hamilton, George Valismis, Peter D'Arcy, Filomena Spagnuolo, Don Talley, Mai Britt Finseth, Valerie, Caroline Munro, Robert Paget, Katia Malmio, Dennis Beasnard, Richard Marner, Jenny Lipman, Holly De Jong
Directors:
David Winters
Producers:
David Winters, Judd Hamilton
Writers:
Judd Hamilton, David Winters, Tom Klassen
Aka:
The Last Horror Film
Studio:
Hollywood DVD
Genres:
Horror

Reviews (1) of The Fanatic

Disillusioned New York Taxi Driver Vinny Durand (Joe Spinell) is obsessed with cult film actress Jana Bates (Caroline Munro). He tells his mother, with whom he shares an apartment - actually Spinell’s home), that he intends to go to the Cannes Film Festival, meet Bates and direct her in a film that will kick-start his career as an acclaimed film-maker. His mother (played by Spinell’s real matriarch Mary – the star of the film, in my view) isn’t convinced. In a warning uttered without punctuation, she says, “Stop thinking about those crazy ideas, you’ll only get yourself upset again, I made baked macaroni, you don’t eat right.”

Caroline Munro seems to be re-dubbed throughout, with an American accent. Visually, she’s as 1980s as it is possible to get, her natural beauty often smothered by make-up and hair colouring and styling. She features in my favourite scene – wrapped only in a towel, running hysterically, barefoot down the middle of a bustling night-time road.

This includes what appears to be real news footage, charting the assignation attempt on then President Ronald Reagan (himself an ex-film star) in an attempt by an obsessed fan to impress actress Jodie Foster.

‘The Last Horror Film’ is by turns dreadful and very funny (especially the last scene). Every few minutes, we are treated to tracking shots of beaches, movie premieres and parties, incessantly accompanied by tuneless 80’s ‘songs, with hoarse-voiced singers, guitars and Linn Drums (which help to ensure the running time seems a lot longer than 90 minutes) – against this backdrop, Durrand comes across as a splendidly drab failure, who might even be responsible for a series of gory murders that seem to follow Bates around …

Filmed, without permits, at and around the Cannes Film Festival, this is somehow saved from being ‘a bad film’ by the genuine warmth and heart that belies the bad acting (although Spinell has moments where he is genuinely unnerving) and zero budget. It goes some way to explore whether or not horror films inspire real life horrific events. Bates’ comeback is that people watch the news, which is more terrifying than any horror films she has ever seen. It’s difficult to argue with that.