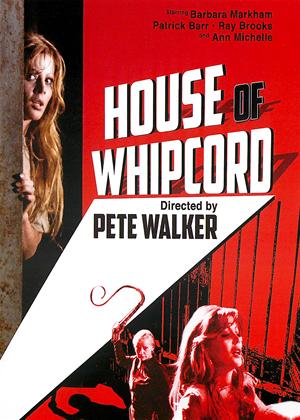 Reviews (3) of House of Whipcord

‘This film is dedicated to those who are disturbed by today’s lax moral codes and who eagerly await the return of corporal and capital punishment ….’

Penny Irving plays Ann-Marie Di Verney, a gullible French model living in London. She is picked up by Mark E Desade (Marquis Desade?), who shows absolutely no sign of being anything other than a wrong ‘un. As he drives her to meet ‘his mother’, she is frightened by his wayward driving and he tells her to go to sleep – which she does! Her innocence is over-played, but Irving nevertheless convinces as someone who truly does not deserve all the truly appalling, and unlikely, things that happen to her (‘First we will kill your vanity, then the rest follows of its own accord,’ she is told at one point).

Of the Pete Walker directed ‘sexploitation’ films I have seen, this is my favourite. It is focussed, features some great central performances (stalwart Sheila Keith is horrifyingly realistic as sadistic warder Walker) and contains a truly disturbing sense of growing hopelessness – a feeling that turns out to be mostly justified.

She is taken to a private prison, a secret place run by Margaret (Barbara Markham) who was fired from her earlier job running an all-girls’ school after one of her pupils - a French girl - killed herself (in truth, it was Margaret who murdered her). She and her warders are dangerously and passionately insane, and now run what they call this ‘private clinic’ away from the eyes of the public. As latest inmate Di Verney (guilty of flaunting her body) is also French, Margaret is intimidated by her presence and determines to have her killed.

To have people imprisoned and punished for lack of morals by ‘respectable’ authorities who turn out to be offenders on a far greater scale is too perverse to be taken seriously as a wholehearted statement ... or is it? It did cause some offence for its ‘oppressive right wing tone’ on its release. As a horror film, though, it all works terrifically well and superbly played by all. Having said that, Di Verney’s friends (including ‘The Flesh and Blood Show’s Ray Brooks) – who are desperately trying to track her down throughout – are dwarfed by the larger than life prison staff.

Although the death toll is shocking, and the location throughout stiflingly austere, I maintain the most frightening thing is the sound of creaking stretched rope that accompanies each of the successive hangings.

Made just after "The Texas Chainsaw Massacre", this film was obviously greatly influenced by it, right down to including one huge lift from it which is then subverted by a particularly cruel twist of fate. But it's a genteel, very British take on a similar subject. The barely human grave-robbing cannibals are replaced by people who are, or at any rate used to be, thoroughly respectable "pillars of the establishment", and the regime they impose on the inmates of their private prison bears more than a passing resemblance to the sadistically irrational world inhabited by the schoolboys in "If...."

As in "Chainsaw", the horror derives from what is literally a nightmare situation: somebody goes for what seems to be an innocent drive in the country, and, for what amounts to no reason at all, is suddenly imprisoned in a madhouse where the lunatics are definitely running the asylum! Though since these awful people were rejected by the mainstream establishment for going too far almost thirty years before the events in the film take place, and have since been acting secretly and illegally, the satirical point the film is trying very hard to make gets a little bit blurred. However, it certainly manages to remind us that in repressive societies, power usually ends up in the hands of deranged monsters who hypocritically abuse the very laws they claim to be upholding.

Although much of the early part of the movie seems to promise us the sexploitation Peter Walker tends to be associated with, giving us gratuitous glimpses of female nudity and a protagonist too daffy to realise that going off for the weekend with a man she hardly knows who makes jokes about cutting her face with a steak knife and calls himself "Mark E. DeSade" is a really bad idea, once he gets down to business, Walker is wise enough to concentrate on the decidedly unsexy villains instead of the prettier but much less interesting victims and their friends, most of whom can't act too well. And, unlike a truly exploitative director such as Jesús Franco, Walker never tries to make the torture of women titillating. What happens to the unfortunate girls is surprisingly un-explicit, with just enough shown for us to get the idea (though the censor may have had something to do with that).

Although it's poorly paced, relentlessly grim, and sometimes mean-spirited, and the scenes outside the prison often look as though they might veer into soft porn at any moment, the large part of the film that takes place inside the titular establishment has real if crude power, thanks very largely to the performance of Sheila Keith, a good enough actress to add subtle undercurrents to what might easily have been a one-dimensional rôle. The villains are victims of their own cruelty almost as much as the women they torment, obsessively sticking to the letter of meaningless rules they constantly twist but can't break in a desperate attempt to maintain the crumbling illusion that they're doing the right thing for the right reasons. Keith in particular, without saying or doing anything to make it explicit, conveys that the twisted joyless monster she has become is the result of a lifetime denying to herself that she's a lesbian, and she's punishing pretty girls for making her feel sinfully attracted to them.

This movie isn't the masterpiece some people say it is, and it's not "fun" on any level, but it's several orders of magnitude above almost all other "psychos torture helpless women" movies, and it really is trying to make a good point, albeit clumsily. It's certainly an interesting take on a clichéd situation, and well worth a look if you're a horror buff. By the way, if you think Sheila Keith is good in this, you should see her pulling all the stops out in "Frightmare" as a sweet old lady with a very nasty secret indeed...

Pete Walker's House Of Whipcord is nowhere near as sordid as the title suggests but that doesn't stop it from being a damn fine piece of entertainment. Worth watching for the brilliant unhinged performance (yet again) of Sheila Keith. 70's British horror at it's best. Recommended.