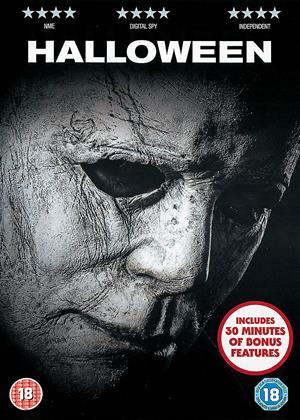 I wanted to like this film more - the idea of a traumatised survivor fully prepared for Michael's inevitable return is a good one, but sadly it's not really explored in any great depth, with far too much time given over to the latest batch of disposable teens rather than Jamie Lee Curtis' character. The film also feels far too predictable and formulaic - rather than giving a breath of fresh-air to the franchise, this feels like any number of previous forgettable sequels. A shame. Works just about as a passable entertainment, but not a film I'll ever need to watch again.

Put this franchise to bed! - Halloween review by TH

Disappointing sequel (forgotten how many there have been)...although the first 10 minutes or so starts okay the film soon goes down hill with many questionable scenes (without trying to give too much away) how Michael Myers escapes?, how he coincidentally bumps into certain characters? (does he have a sixth sense alongside his psychopathic one)? and continues onto a very very similar rampage to 40 years ago and yes all on Halloween!...the script writing is lazy and most of the characters you don't care about other than Jamie Lee Curtis as Laurie who plays the over top ex-escapee of Michael from the original and now has a house prepared for his return stocked with ammunition to take on North Korea. This slasher type of film was okay back in the day of the late 70's early 80's but now feels old hat and one question keeps calling how does Michael kill so many people including Police when he moves as quick as an asthmatic ant with a ball and chain?

Slain it all before - mild spoilers. - Halloween review by NP

We have two ‘iconic’ characters from the franchise now: Michael of course, and Laurie Strode, played by the mighty Jamie Lee Curtis: more mature now, but still very much in possession of ‘the body’ she was famed for back in the 1980s. Strode is now a self-confessed basket-case, which allows her grand-daughter plenty of opportunities to appeal to the teen-audience by dishing out life-advice for granny. “Get over it,” for example, in relation to her ongoing trauma caused by events in the original film. Another familiar face – and I realise this may be a minority thrill among this film’s fans – is that of Dr Sartain, who has been looking after Michael since Dr Loomis is now dead, like the actor who played him (we get a brief and very welcome voice-over from Donald Pleasance early on). Sartain is played by Haluk Bilginer, who was terrific – also in the 1980s – as roguish Mehmet in BBC soap EastEnders when it was at the height of its powers.

The associated teens here are as silly as you would expect. Quick witted, sexually arrogant and fashionably stoned. They don’t annoy too much, but the weightier material is reserved for two pod-casters who are eager to get inside the mind of Michael, Aaron Korey(Jefferson Hall) and Dana Haines (Rhian Rees). They don’t have much time to achieve this.

I’ve never been massively into this franchise. I found the first film enjoyable and Rob Zombie’s 2007 reboot breathed new life into a fairly standard central character. All other sequels, or reimaginings, I have found incredibly tedious. This version, after giving Michael such a build-up, chooses to begin his latest mild killing spree in curiously muted fashion. There is no sense of occasion. That Michael always happens to go on a rampage on Halloween, and that he is referred to as ‘boogie man’ has seemed to me a blatant merchandise ploy. That said, when John Carpenter’s theme music kicks in, there’s no denying its power.

I found this rather lacklustre to be honest. Once again for example, a major moment of drama occurs because one teen kisses another teen. It is difficult to care because firstly, the characters are inoffensive but vacuous, and secondly, Michael’s strolling round leisurely hacking people up (often off camera, surprisingly and disappointingly). A sadly diluted environment for this much lauded return.

Has a feel and sound track to it like the original which adds to the eerie suspense, classic Michael in the background and hiding in the shadows, as well as been proper angry!. More so in this film than the original.

There were lots of great moments and the odd few annoying shout at the tv as to why the characters are making stupid desissions.

If your a horror fan or a Halloween fan then this film is a must watch!

I would give this 2 and a half stars . It's watchable and reasonably well done if a bit short on genuine scares . I didn't find Jamie Lee Curtis believable or convincing in her role .

Overall , this film is nothing special.

Maybe i needed to watch the original? - Halloween review by JD

I think ive seen an older halloween film (the one where they play a creepy tune to kids and cockroaches appear and stuff) but not the proper one with JLC in.

This film just felt a bit empty to me. Right from that first scene which i think is trying to be creepy, but isnt. Its just silly.

You get all your typical - we will be safer if we actively search for our ends on our own - lazy directing and scripting stuff. JLC goes all sigourny weaver which is a bit old. Literally in this case.

I dont mind if a film lacks plot if it has something to make up for it. And unfortunately silly (in a bad way) isnt it.

On the bright side at least our villain gets through a fair few people i didnt mind seeing an untimely end to.

The first 15 mins or so were interesting, but it then lapsed into a standard slasher movie. There was a single twist but the outcome hardly surprising. I would have thought the film makers, after so many of these, would have tried to shed some light as to 'why' he was as he was, but no, give him a knife and produce a boring, predictable film.

This Trick Is Certainly No Treat - Halloween review by Spoons

I really wanted to enjoy Halloween but sadly I just didn't. This is a yet another pointless entry into an already overdone franchise. This and all the other sequels tarnish the name of the 1978 classic which never was and never will be surpassed. Please, let's just let Mr Myers RIP.

It’s unfortunate that David Gordon Green’s take on Halloween comes labeled as just Halloween, despite acting as a direct sequel to the 1978 original film. Now in the years to come when one refers to Halloween, I’ll need to specify whether it’s the John Carpenter version (1978), the Rob Zombie version (2007), or the David Gordon Green version. Despite the confusion, it’s such an effectively tense picture that it could come labeled as the better sequel.

Yes, despite the title, this is indeed a continuation of the original story, acting as though the events of the previous sequels more or less never happened. Jamie Lee Curtis returns to the role of Laurie Strode, aged forty years and still terrified of Michael Myers after that fateful and frightening night of killings. Though Myers has been held in captivity at a mental institution without escape for many years, Laurie can’t sleep easy. She has been preparing for his eventual escape, knowing full well that Michael won’t stop his rampage until he is dead. She trains herself with firearms, builds a panic room in her basement, and formats her house to be a trap for any killers wandering inside. And despite all those decades of crazy prep result in the loss of faith from her daughter Karen (Judy Greer) and distance her from her granddaughter Alyson (Andi Matichak), it is about to pay off.

Michael Myers will eventually break out of his containment and it’s back to basics for the silent psychopath. Dark jumpsuit with strong boots? Check. Filthy Halloween mask that looks as though it hasn’t been washed since the 1970s? Check. Suburban neighborhood killing spree with common household tools? Check. Intimidating presence? Double check. He also has a host of victims to assault, from police officers to unlucky mothers to naughty teenagers.

David Gordon Green makes the smart call by loading his version of Halloween up with heaps of atmosphere more than money-shot kills. While Michael Myers does get in a good head-stomping or neck piercing here and there, he also makes simple kills of snapping necks and choking victims to death. But thanks to some clever shooting, lighting, and an oh-so-delicious throwback to Carpenter’s classic score, the mood is all there for the good old-fashioned Halloween vibe before sequels and reboots muddied up the name of Myers.

Green’s film naturally functions as an homage but takes care never to wink too hard. Laurie isn’t the only one who has gotten wiser with time. One teen remarks how the five murders of Myers in the 1970s seems almost quaint. A young kid with a soon-to-be-targeted babysitter is so up on slasher movie logic he makes the smartass calls of when to leave and how to react. There are even some nice and subtle callbacks in the cinematography, as with an alternate take on the climactic shot from the first film. It also avoids the greatest pitfall of trying to decipher Michael's origins and motivations. He is kept as tight-lipped as Laurie and the intrusive nature of the investigating podcasters and an obsessed doctor will receive no concrete answers; only a silent bloodbath amid Michael's heavy breathing.

I can already tell there are a few jaded horror fans that are going to take arms against this Halloween for one specific reason: they don’t find it as scary. And after leagues of horror movies high and low, I, too, admit that Halloween doesn’t quite chill the bones as much as the deeper terror of Hereditary and It Comes At Night. But for being more of a ride of a slasher picture with all the nostalgic details lovingly grafted, it’s hard to deny that Green’s film gets Halloween right and presents about as satisfying of a follow-up film as one could hope for from this franchise.