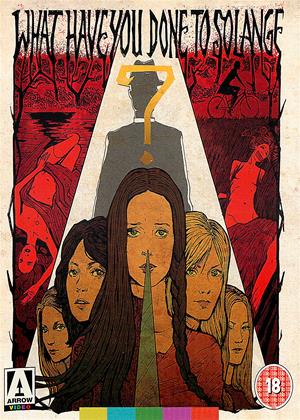 Reviews (1) of What Have You Done to Solange?

Spoilers follow ... - What Have You Done to Solange? review by NP

Whilst enjoying an afternoon on the river, married teacher Enrico (Fabio Testi) is stoically attempting to coerce one of his young students Elizabeth (Christina Galbo) into having sex with him, when she notices on the bank, the glint of a knife in the sunshine. Dismissing this as an excuse not to give into his demands, Enrico is therefore stunned to later hear on the radio of a murder of a young girl in the area that very afternoon.

Selfishly, Enrico initially forbids Elizabeth to report her suspicions to the police, for fear his liaison will be exposed. However, sympathies with Enrico begin to materialise when it seems his affair with Elizabeth isn’t a whim. His wife Herta (Karin Baal) is cold hearted and unloving, and what Enrico and Elizabeth share might well be true love. As the murders continue, the film enters into proper horror territory, with nightmares and growing graphic atrocities conspiring to tighten the proverbial noose around Enrico’s neck, as he appears to be the main suspect.

In a further shock, Elizabeth herself is murdered, and this appears to bring Enrico and Herta closer – it is interesting that in softening her character, Herta takes to wearing make-up, as opposed to the harsh ‘freshly scrubbed’ appearance she had adopted earlier.

(Spoiler) Solange, when at last she appears, is the character around whom the murders all centre. Her father posed as a Preist in order to obtain confessions from Solange’s school-friends who arranged an illegal abortion for her against her will. The brutality destroyed her mind. The final frame of the film has her sobbing gently as her father shoots himself having at last been discovered.

This has been billed as ‘giallo’ film, that is what Wikipedia describes as a ‘20th-century Italian slasher genre of literature and film, usually with mystery elements and often with either supernatural horror or crime fiction elements.’ As such, it fits the description well.

The flawed nature of Enrico fuels the story – he is far from perfect and a ready-made scapegoat for the murders. He is not given to passionately protesting his innocence, and it may well be that un-emotive nature that robbed his wife of her love for him; darkly poetic then, that such a harrowing tragedy should bring them back together.