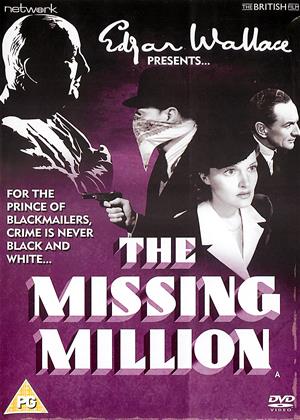 Unavailable
The Man Who Finally Died

Unavailable
Man on the Run

Reviews (1) of The Missing Million

THE RIGHT COMBINATION - The Missing Million review by CH

“I'm a man of action.” So says a Scotland Yard Inspector (played by John Stuart) in The Missing Million (1942) in a Soho café, where Linden Travers replies, with a flash of her eyelids, “I might make you prove that one day.”

Such a flashy moment enlivens a film, where so many words have been used to explain who has been where, when and perhaps why, as Miss Travers's brother (Ivan Brandt) has gone missing shortly before marrying the daughter of a well-to-do Treasury official.

All this springs from an Edgar Wallace novel. Does anybody read him now? He was in the habit during the Twenties of dictating his thrillers over a weekend, and reaping the royalties from those who read them at a similar speed. He had a way with a plot – shown, two or more decades after his death, in the Fifties and Sixties television series inspired by his work.

He turned variants upon a metropolis where sundry Mr. Bigs held sway. In this case there is one who leaves porcelain pandas after he has paid a visit to a scene of interest to him. And so it is that, with a blackmail threat against him, Brandt vanishes, as does the million pounds which became his when his businessman father died.

What is going on? In the ordinary course of events, one might not linger, especially as there is repetitive misogyny from a safecracker (Charles Victor): “married? I may have been in prison but I've not fallen that low!” Against his performance one must set the stylish turn by Linden Travers, who appeared in films for too short a time - and had inspired Graham Greene five years earlier to laud her rôle in the sultry Brief Ecstasy, notably for “the buttocks over the billiard table” as an emblem of “the ugly drive of undifferentiated desire”.

There's nothing to match that here as many of those around her duly receive a slug in the chest while it becomes clear that for the Panda matters are never black and white - but one's patience is further rewarded in the final moment by seeing the irritating safecracker making a gay advance (I kid you not), which would certainly count as a specialised taste.