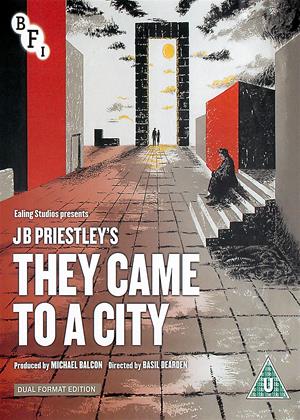 Rent other films like They Came to a City

Reviews (2) of They Came to a City

Astonishingly relevant today! - They Came to a City review by TE

What a superb discovery! This is a spellbinder of a film.

The post-WW2 concerns about the future of society and the planet are just as relevant today (maybe even more so) and this film is a basic primer in the archetypes of capitalism, social democracy and revolutionary politics.

Some of the stylings might have dated, but this is a great, timeless movie.

"Be careful, they might kill us." So says Lady Loxfield (Mabel Terry Lewis) to her daughter, Philippa (Frances Rowe), who replies, "they were killing me in Bournemouth!"

They are but two of nine people who find themselves outside a closed, heavy door beside a staircase to a city which they can see from these ramparts. After some familiar opening scenes - aboard a train, in Bournemouth, beside a boxing ring and so on - which are suddenly blacked out, most of They Came to a City (1944) takes place beside that door.

This might not sound the stuff of a film, but these eighty minutes pass rapidly, such is the dialogue between those who find themselves on the brink of a utopia - theirs to join, if they are willing to look within themselves and, in some cases, come to agreement with their partners (a vexed matter). All this comes from a 1943 play by J. B. Priestley who, in this film (which has most of that original cast), appears in the opening scene on a Northern hillside where a serviceman and his girlfriend are debating the future when the War is over. She hopes for a new one; he fears that the old guard will hold sway. Priestley - complete with pipe and unlikely hiking gear of his striped suit - sits down with them, and so their debate continues between those who find themselves beside the Door as it opens to allow a closer look at what is on offer.

We do not see that city, but duly hear the differing views of those who come back, either to rejoin life as they knew it or go back to the future.

This was a future - with Scriabin's rousing music to the fore on the soundtrack - inspired by Whitman's lines "The place where a great city stands is not the place of stretch'd wharves, docks, manufactures, deposits of produce merely." That is, there is more to life than meaningless toil for others' gain. For all his roots in Northern life, Priestley - as in An Inspector Calls - was given to allegory and its ally, the didactic spirit. His positing of a brave new world - with such people in it as a bank's branch manager (Raymond Huntley) who comes to see something else in life beyond the trumpery vanities enjoyed by his wife - was contemporary with Beveridge's Report and accorded with the social concerns of the film's director Basil Dearden. Made under the Ealing banner, it states many of the ideas which animated the studio's subsequent, more comic comic scenarios. Some might say that the film had an effect upon the 1945 General Election, which led to Attlee ousting Churchill.

And of course it has an echo in our own times, when many people - amidst the virus - are discussing a future world, with such things as a basic income which will enable people to have a better chance of fulfuilling their potential. Not that we should hold our breath. After all, the Attlee government did not cease hanging people and it continued to hound such gay people as Alan Turing, whose computer work led to the Internet which has lost much of its Utopian 1990s bloom. Looking back, in 1950, Priestley had remarked upon the many thousands of perfomances of the play (not one of his favourites) and the differing interpretations put upon it (about Jung and "even a plea for town planning"). He added, "what is important in the play is not the city but the respective attitudes of the characters toward it". Has it been produced lately on stage this century ? It could be, but recall Priestley's remark: "I should like to warn them against turning it into a melodramatic production with too heavy a bias against the older characters".

As for the title of this review, it is a reminder that the expression did not begin with the title of a famous Fifties film. Priestley's character was using a naval one uttered by somebody safely aboard a lifeboat, ready to be winched up - and to Hell with anybody still in the sea.