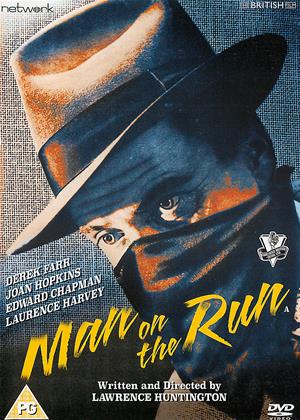 Under the Counter - Man on the Run review by CH

"Appearances can be deceptive, Inspector."

This exchange takes place between Joan Hopkins, who appeared in too few films, and Laurence Harvey, in one of his first roles, and is typical of the adroit pace at which Man on the Run (1947) moves through a post-war Soho whose pubs, cafés, shops and rooming houses are well caught, a world in which spivs and worse are on the loose.

Derek Farr plays a deserter who has been spotted, blackmailed (by Kenneth More), and gone in search of the requested funds only to find himself caught in a hold-up where a policeman is murdered. He has to hide, and finds shelter with department-store assistant Joan Hopkins whose divorce proved slower than her husband's fatal war wounds, which means that she has a useful pension. It is fascinating to learn that there were 20,000 deserters at this time, many of them with as good reason as Derek Farr to do so; their existence, one of false papers and fear of exposure, laid them open to crime, whether as victim or perpetrator.

To say any more about the way in which events move, with the Thames almost a character in its own right, would spoil things - but it is curious to find that, for the German release, the final two minutes take place in larger premises, and that - but, no, a reviewer should follow Joan Hopkins's example and not give anything away.