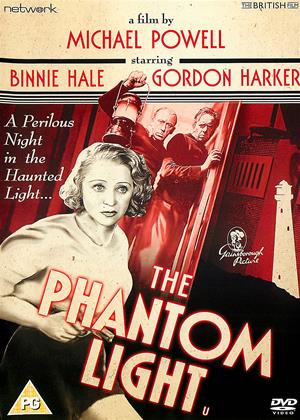 Reviews (1) of The Phantom Light

To the Welsh Lighthouse - The Phantom Light review by CH

"I am a sucker for lighthouses. The lonelier and more inaccessible, the better. And I love comedy-thrillers," recalled director Michael Powell, and so he said yes immediately to working on The Phantom Light (1935) which, in its time, was regarded as another quota-quickie or poverty-row production derived from a now-vanished play. This, though, was a task of which Powell said, "I enjoyed every minute. The less said about the plot the better."

Put simply, in the opening minutes Gordon Harker arrives by train to take up his new job in charge of a Welsh lighthouse where the previous incumbents have come a cropper. Also among the newcomers are Binne Hale (better known for her stage career than a few films) and the now-obscure Ian Hunter who played dashing - in all senses of the word - young men in the Thirties.

Something shifty is happening, and there is a strong suggestion that some of the Welsh are up to no good. However that might be, Powell lavishes superb cinematography upon them, whether in a pub, upon a dodgy automobile, and more. What's more he studied many a lighthouse before setting to work (and combined several in the eventual fim).

For all that, a fair proportion of the film comprises interior shots of a confined lighthouse, with, naturally , many a scene upon tightly-curving stairs. Tightly curving could also be a phrase for Binnie Hale's thighs. Having come a cropper in the water, she is kitted out with Gordon Harker's Sunday trousers, which she promptly reduces - so that they fit - to something which anticipates hot-pants. Whatever the chill of the night air, she scurries about in these, and proves a great foil for Gordon Harker's barbed remarks.

Gordon Harker? Let Powell explain. He "was one of those naturals that every country has - a face to remember: in France Fernandel, in Mexico Cantinflas, in Italy Alberto Sordi, in America Humphrey Bogart, in Ireland Victor McLagen, in Germany Conrad Veidt... He was one of Hitch's favourite faces, and Hitch had helped to make him a star. He had one of those flat, disillusioned Cockney faces, half-fish, half-Simian, with an eye like a dead mackerel. In one of Hitch's first successes, The Ring, a boxing picture, Gordon Harker had played one of the hero's seconds and nearly stole the picture. He was wonderful in silent films, but even better in talkies. He got his effects with all sorts of strange sounds, and to my delight he could hold a pause as long as any actor I had known. Close-ups were made for him, and we both took full advantage of it."

And Graham Greene concurred, remarking in one of his first film reviews that Harker "gives one of his sure-fire Cockney performances". Ever sharp-eyed, Greene also remarked , "that fine actor , Mr. Donald Calthrop, is fobbed off in a small part. Mr. Calthrop has seldom been lucky in his parts. There is a concentrated venom in his acting, a soured malicious spirituality, a pitiful damned dog air which put him in the same rank as Mr. Laughton". Calthrop scarcely appears, but he is brilliant.

All of which suggests there is so much to enjoy here. And, as waves break on the rocks, one thinks of all that Powell would create as more than a backdrop to The Small Back Room and I Know Where I'm Going.