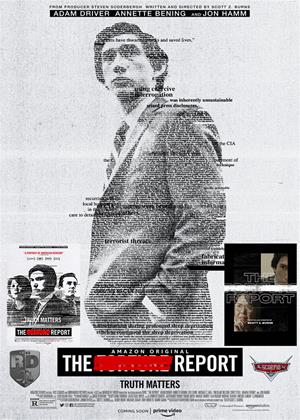 Reviews of The Report

The Report is a film of great ambition that doesn't quite pay off for what it sets out to say and showcase. A political drama that is all about sifting through endless documents to get to the truth doesn't exactly make for the most stirring of thrillers. This is not to say that the government investigation wasn't intriguing or important but there's only so much that can be evoked from such a struggle of legal sorting drowning in paperwork. But when presented in a stuffy film of large closed interiors and meetings most routine for seeking the truth, the narrative, unfortunately, spins this tale as more boring than contemplative.

Adam Driver brings as much emotion as he can for the concerned FBI agent Daniel Jones. After the events of the September 11th attacks in 2001, the CIA engaged in new and immoral methods of torture. Daniel is tasked with looking into the matters of the CIA extracting information by compiling a large-scale report on the issue. He continues to scan through document after document, sometimes through concealed computer databases and other times through large stacks of papers towering many feet high. The more he proceeds through the operation, the more corruption he discovers about how much was known before the attacks and how horrifying the tactics were that followed.

Jones's report continued for years and years, growing thicker by the days. The full report was said to be over 6,000 pages long. Much of it was redacted and covered up. Several figures conspired to hold this report back, trying to ensure that a larger scandal would not be revealed. Daniel spends much of the movie butting heads with those who argue more for the security of the country than the duty of maintaining civility. He receives all the expected blowback of powerful figures stressing that the information in this report is going to hurt people that have families and hinder the security of the country. At one point, Daniel is asked who he is more loyal to; his superiors or the report. It's a tough question he is pressed to think about it deeply.

I'm sad to say that for as important a film as The Report appears, its non-linear approach falters. The scenes of arguments over the processing of the report are intriguing but more from the events themselves than the performances behind them. A few scenes of interrogation are present to argue how little considering was taken in these actions of information extraction but there's an uncomfortable air in presenting them in diced up bits of intensity, lessening the more grizzly aspects of the inhuman actions. In between are brief bits of the CIA trying to spin their own logic in torture being effective. By its very design, torture of prisoners has been known to bring about false information and ultimately been ineffective. Yet the CIA operatives argue that the extraction of lies is not for nothing, that knowing a prisoner is lying is just as effective as telling the truth.

The Report is a slog of a picture that tries to showcase in its meandering nature how corrupt the CIA has become in the wake of a tragedy that it faces little in charges. Daniel is asked if he's willing to go to task in suing the CIA and we more or less know the answer. By the end of the film, we're given the full story about how report was released but nobody from the CIA was prosecuted. Many, in fact, were promoted. This is all-important political affairs worth your time seeking out but reading the report itself may be a better option to gain more of the full scope. This film makes the questionable call of touting the Bin Laden thriller Zero Dark Thirty in the same movie, a sad commentary on how the more thrilling pictures seem to get the most across. More audiences are likely to flock to a military thriller of hunting down a terrorist than an FBI agent pushing papers to reveal the truth.