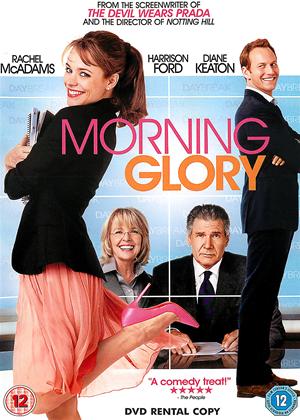 An enjoyable film and well written and the acting excellent by the starry cast. An unusual film for Harrison Ford.. but he always adds gravitas to the films in which he appears. I love seeing Jeff Goldbloom playing a very disillusioned executive struggling to keep up the viewing figures.

Director Roger Michell returns to romantic comedy with ‘Morning Glory’ set in the world of competitive ‘breakfast news’-type shows. Becky Fuller (Rachel McAdams) is a workaholic TV producer who takes on the daunting task of reformatting and hopefully, correcting the low ratings of the DayBreak morning show. Her fresh ideas include hiring grumpy-old-anchorman Mike Pomeroy (Harrison Ford) and partnering him up with control freak hostess Colleen Peck (Diane Keaton) to boost ratings. Sparks fly but unfortunately, not the good kind. With temper tantrums of on-air talents and grand plans for a number four TV show, Becky’s work is cut out for her.

Rachel McAdams is pitch-perfect as a go-getting woman who rises up to the challenge of helming a mediocre-at-best TV show. Her interactions with her co-stars, specifically with veterans Harrison Ford and Diane Keaton, are a marvel to behold. You wouldn’t expect McAdams to hold her own but with such Hollywood stalwarts such as Ford and Keaton, she proves to be not a lightweight. Ford fits the aging anchorman to a tee. His cantankerous relationships with both McAdams and Keaton are comically flawless.

Ford knows how to play a handsome yet lovable curmudgeon. Applause must be given to the DayBreak staff – they are a character in the movie in itself – which includes actors Patrick Wilson and Jeff Goldblum. ‘Morning Glory’ wouldn’t work if the DayBreak Staff does not showcase how behind-the-scenes people deal with diva talents, fellow quirky crew members, and basically, hard labor in a TV production. You get an idea of how a TV show really works (or not) and in this movie, you expect the happy ending is a leveling-up of its ratings.

Although ‘Morning Glory’ is considered a romantic comedy; meaning it’s a love story between a man and a woman, I find the movie more leaning towards a love story between a woman and her job. Let’s face it: women are not exactly just focused on getting swept off her feet by her Prince Charming alone anymore. Can’t she have a successful career first then have her prince, wedding, and babies next?