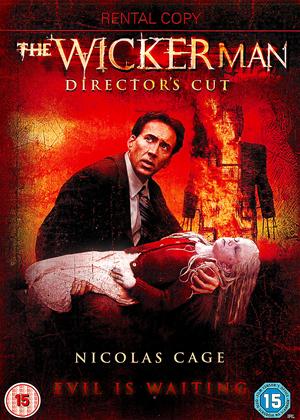 Reviews (5) of The Wicker Man

Maybe I should have watched the original?!!!! - The Wicker Man review by CP Customer

As the title says, have never seen the original and have to say, I imagine it was probably better than this.

I love Cage, but his dry humour just didn't fit with this film, the plot is silly, nothing really happens, and this tends to only work in the classics when they have atmosphere on their side, which this did not! However, I was suprised by the ending, but only for about 30 seconds!

I've seen the original 1973 'Wicker Man' a couple of times, I'm not a particular fan of the original and was prepared to watch this remake with an open mind, but the truth is this is a truly awful film. While the storyline is pretty much in line with the 70's film, it changes key elements which made the original film so memorable. The original 70's film storyline followed a mainland policeman sent to investigate a missing child on a remote Scottish island, and a key part of the storyline was this straight-laced devout Christian policeman forced to be on an island with a heavily sexualised pagan community which both repulsed him and caused him to fight his own temptations. This key element is completely removed from this remake and is replaced by a dull California cop traumatised after a fatal road accident, who goes to the island after receiving a letter from his ex-fiancé claiming her child is missing. Because the key element of sex and paganism is removed from the remake the film really looses it's heart and ends up being little more than a fairly shallow thriller, and they even manage to ruin the memorable end of the film by tacking on an unnecessary additional scene. Nick Cage is up to his usual standard of dull wooden acting and the scene towards the end of the film where he's pursued through the woods while wearing a bear costume was just laughable. If you've never seen the original 1973 'The Wicker Man' I would rent that and give this a miss.

I have never seen the original but wish I hadn't bothered with this. I believe there were pagan fertility rituals in the original, but the point is lost in this uber feminist matriarchal version, where the men (in their rare appearances) are totally subservient to women. It's depressing and there is no closure - too many loose ends that leave you frustrated rather then pondering on possible outcomes. Totally unbelievable plot and hammy acting. Don't bother!

Keeps you guessing.. - The Wicker Man review by CP Customer

A good film all round, that keeps you guessing all the way through, to a suprising though abrupt end.

Watch out for the 'Misery' scene, late in the film.

This is a great remake! but if you've seen the original you may be disappointed,i'm a Cage fan and it's not his best movie,some very creepy and chilling characters.