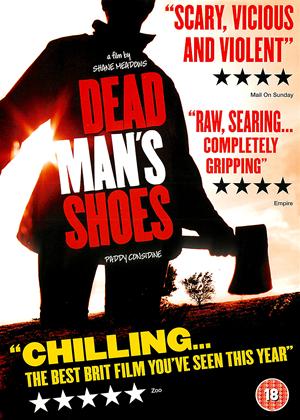 I ordered Dead Man's Shoes with apprehension, although I hold a lot of faith in home-grown horror, there's always the chance that it's going to be a case of gore over plot.

Thank goodness, then, that Dead Man's Shoes delivers heavily with the plot - more than a simple revenge plot, Richard's struggle to come to terms with what has happened to his brother (Anthony) is voiced perfectly in the juxtaposed scenes of rural tranquility and surreal, nerve-shredding terror. What's more, it isn't a jump-based horror, the cinematography never sets us up for a scare, but instead leaves us feeling oddly detatched from the carnage.

If you want blood and guts, go elsewhere, if you want sudden jolts, keep looking. But it you want an intelligent, heartfelt and compelling film that'll also leave you sleeping with the lights on, look no further.

Sit back, relax and lock the door.

High Plains Drifter set in the Peak District, with Paddy Considine (who co wrote with Meadows) seeking those responsible for the death of his brother. Not just a suspenseful revenge drama, but Meadows again creates a real environment, whether the enervating poverty of his small town, or the feeble lives of his criminal gang.

This film is about retribution for the sins committed by a najirityof the cast. But then we get to the real conundrum: who is the 'ghost'? The original victim or the avenger?