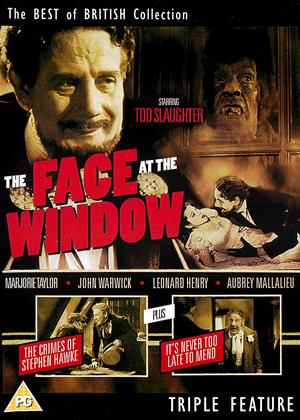 Poor Tod Slaughter. Once upon a time he was Britain's second-greatest horror star, outclassed only by the mighty Karloff. But who remembers him now? "Tod Slaughter" is hard to beat as a name for a horror movie actor - eat your heart out, Rob Zombie! - but when was the last time you saw one of his films?

Well, now's your chance. Three of them, in fact. First, the bad news. This box-set from the unashamedly cheapskate and not altogether accurately-named Best Of British Collection includes two extremely minor Slaughter vehicles, one of which is so low-budget it has seven minutes of almost surreally irrelevant comedy by justly forgotten variety artists tacked on at the beginning to bring the runtime up to feature length, and the other is not only a tame affair that doesn't even involve any murders, the battered old print has a very annoying soundtrack fault throughout the film. These are both on Disc 2, so if you're merely curious to see what a Tod Slaughter movie is like, save a rental and just get Disc 1.

Which contains "The Face At The Window", an excellent introduction to Slaughter's unique acting style. I don't know if any of his films include a scene where he chains a screaming woman to railway tracks while cackling madly, but I'd be surprised if he didn't do that at least once, because he was the only true example of the classic silent movie villain to survive into the sound era. He's a live-action Hooded Claw who actually gets to kill people, and when he walks onto the set, the scenery curls up into a little ball and whimpers "please don't eat me..." This film is so out of date even for 1939 that the opening text crawl not only admits it's an old-fashioned melodrama using those exact words, but cheerfully tells the viewers that if the film provokes more laughter than fear, that's fine because all it's trying to do is entertain them however it can.

Such honesty is not only refreshing but necessary, since nobody over the age of five could take Slaughter's black-hearted bastard of a villain seriously, though since our eye-rolling moustache-twirling anti-hero is not only a serial killer but very heavily implied to be a rapist, and he certainly has unwholesome designs on the hero's girlfriend, I assume this film wasn't intended for kids. Nevertheless, as one-dimensional pantomime baddies with absolutely no redeeming features go, Slaughter really is in a class of his own!

The obscure and underwhelming supporting cast are only there to give the star someone to endanger, and the barking mad plot about 19th century Paris being terrorised by a knife-throwing werewolf is as daft as I've just made it sound, but who cares? This is the sort of movie in which the baddie's favourite pub is called The Blind Rat just so you know the regulars aren't nice people. No-one could honestly call it a good film. But it's a cracking good bad film that does precisely what it says on the tin without pretending for a second to be anything more than what it is. Why doesn't this man have a cult following yet?