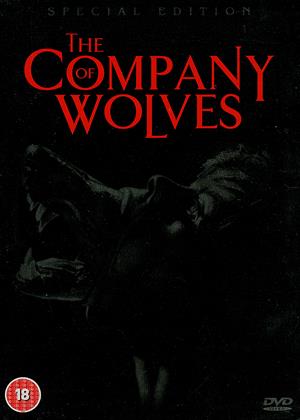 Reviews (4) of The Company of Wolves

Spoilers follow ... - The Company of Wolves review by NP

‘The Company of Wolves’ is an extraordinary dream-like series of set-pieces crammed with haunting detail and imagery. Young crimson-lipped Rosaleen (Sarah Patterson, impressive here and yet this is one of only a handful of film credits) sleeps – or sulks, as her spoilt sister Alice (Georgie Slow) would have it –in a glorious but ramshackle mansion that appears to get more untended the closer we get to her bedroom. She dreams of her precocious sister running through a haunted forest, fighting off giant teddy-bears, doll-houses and sinister grandfather clocks. It is a heady nightmare, with Rosaleen’s disturbed sleep ‘watched’ by a Mrs Tiggy-Winkle doll strongly reminiscent of her eccentric granny, whom we meet later. Wolves are, of course, prevalent in her dream, just as they are throughout the film.

Further into reverie we go, with mourners at the picturesque village burying Alice, with others played by such luminaries as Brian Glover, Graham Crowden, Stephen Rea, David Warner and magnificently eccentric singer/songwriter Daniella Dax as an unnamed wolf-girl.

“Once you stray from the path, you’re lost entirely,” warns Granny (top-billed Angela Lansbury). And that seems to be the metaphor for the film, which appears to be staged for the most part via tremendous studio sets. I mention this because such an arrangement allows for the world in which we inhabit to be entirely controlled by the film-makers – a village straight out of fairy-tale, a snowy-landscape made from every Christmas nightmare, and an autumnal air of folk-horror. Granny’s stories/warnings permeate the narrative – Stephen Rea’s travelling man marries Kathryn Podgson’s young bride but disappears, only to return years later as a werewolf. In a second cautionary tale, the Devil (Terence Stamp) offers a young man a lethal potion. The third features a heavily pregnant enchantress ‘done a terrible wrong’ who arrives at (the child’s father) an aristocrat’s wedding party and transforms everyone into wolves. The final tale features a she-wolf (Dax), who ascends from ‘the world below to the world above’ meaning no harm, yet is shot by ignorant villagers.

The stories are potent, haunting, mesmerising. The effects and transformations are excellent (particularly Rea’s character – his werewolf alter-ego is beheaded, which lands in a vat of milk, only to surface as his human head once more) and the atmosphere absorbing. But what does it all mean? “(Men) are as nice as pie until they’ve had their way with you; once the bloom is gone, the Devil comes out,” warns Granny. So, anti-men then? A coming of age parable? Certainly the Hammer-style horror-trappings and Red Riding Hood motifs seem only a convincing canvas on which to broadcast other things – a fear of adulthood, perhaps? Or maybe, given her ultimate fate, Granny’s warnings are proven to be worthless? Whatever, Angela Carter and Neil Jordan’s screenplay is an unspecific nightmare world of mindfulness and possibilities and remains not only one of the most original takes on the werewolf myth, but one of the most artistically successful too. Wonderful and extraordinary. An adult fairy-tale indeed.

My, What a Big Imagination You've Got... - The Company of Wolves review by Count Otto Black

As a previous reviewer points out, this movie predates the invention of CGI, therefore its animatronic special effects are somewhat crude by today's standards. If this will utterly ruin your viewing experience, don't rent it, or any other fantasy, sci-fi or horror film made before 1991. If, on the other hand, you can watch transformation scenes no better than those in "An American Werewolf In London" or "The Howling", which back in 1984 were unsurpassable state-of-the-art, without getting snippy because 35 years on they look a wee bit primitive, you might enjoy this film rather a lot.

In any case, since all the action other than a few minutes at the beginning takes place in a dream, any failures in the perfect realism department are beside the point. The nameless village and its surrounding wolf-infested woods are obviously studio sets, but it doesn't matter. This isn't the real world, it's a twisted Wonderland seething with monsters of a kind that innocent little Alice never dreamed of. Talking of whom, right at the start we meet a character who just happens to be called Alice, who, once the dream kicks in, last about two minutes before, as far as she's concerned, this particular fairy-tale has a very unhappy ending indeed.

There are plenty of other nods to classic fairy-tales, from the obvious Little Red Riding Hood references to the mischievous moment when we see the villagers working in what looks like the same mine that employs Disney's Seven Dwarfs. But the most subversive parody of them all will probably be unnoticed by younger viewers. Remember Mary Whitehouse? If not, you might want to read her Wikipedia entry before watching this film, because if you do you'll appreciate Grandma a whole lot more!

It's Grandma's valiant but inevitably doomed efforts to protect the young protagonist from her own budding sexuality, which from Grandma's point of view is so beastly that seduction by a man is literally identical to being eaten by a wolf, which are the key to the whole narrative. Nowadays any movie in which everything that happens is a metaphorical depiction of an adolescent girl's sexual awakening would be so controversial it probably wouldn't get made, any more than a pseudo-mediaeval English village wouldn't be forced to have incongruous non-white inhabitants because Diversity. However, despite the 18 certificate, which is justified only by one rather gory werewolf transformation, there's nothing problematic about its depiction of the sexuality of an underage girl. Apart from a couple of rather chaste kisses, everything she gets up to is as symbolic as the scene in which she climbs a huge tree and discovers the stork's nest where babies come from.

There's so much symbolism, all of it pointing in one very obvious direction, that at times it threatens to overwhelm the story. But as flaws go, it's a very minor one compared to the howling blunders of almost every modern attempt to scrape the Disney off fairy-tales and put the Grimm back in - looking at you, Mr. Gilliam! It's not a perfect film, but it's the kind of wildly imaginative one-off that in this age of conveyor-belt franchise clones we could do with a lot more of, even if it means putting up with a few minutes of effects that aren't quite as special as they once were. And for an incredibly strange double bill, how about this film plus "Labyrinth", a kinda sorta remake which instead of werewolves has its teenage heroine imperilled by the rampant masculinity of David Bowie?

Beautiful nightmares - The Company of Wolves review by RJ

This is one of those occasions where I don't have to go to the trouble of writing a review, because two other Paradiso members (NP and Count Otto Black) have already written helpful, insightful reviews to which I would add nothing.

I will say that it took me two viewings to appreciate this film, having gone in knowing almost nothing about it and expecting a more conventional narrative. After the first viewing I did a bit of reading about the film (including the two reviews I mentioned above) and on second viewing it was like I was watching a completely different film.

A delightful, imaginative meditation on fairy tales - I loved it.

Rife with coming-of-age sexual symbolism and gothic fairytale details this film attempts to retell the Little Red Riding Hood fairytale as a girl's right of passage. It has a distinctive atmosphere but is undermined by how dated it looks now - the special effects, especially those where man turns into wolf - look extremely clunky now. One of a kind though, worth a look.