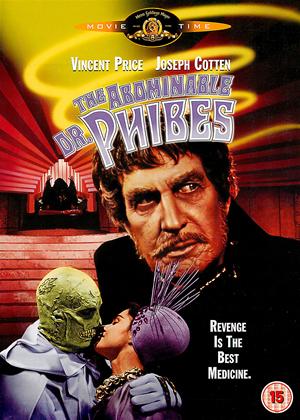 Reviews (3) of The Abominable Dr. Phibes

Vincent Price was always one with a tendency to ham things up a bit too much so his best work is always the more tongue in cheek horror rather than the po-faced stuff. Here he gets to play a sly, deranged genius bumping people off in various gruesome ways. An all star supporting cast including Terry Thomas. This DVD version is really nicely remastered too, with upscaling, it looks like a blu-ray

The novelty wears off quickly - The Abominable Dr. Phibes review by RJ

I quite enjoyed the first 25-30 minutes of this low budget comedy horror, but thereafter it became rather repetitious and my interest waned pretty quickly (shortly after Terry-Thomas' fun cameo appearance). It's a cheaply made film mostly lacking in creativity and imagination in which the actors give weary, can't-really-be-bothered performances. It lurches between comedy and horror; although the 'comedy' largely amounts to the unfortunate Inspector Trout constantly being erroneously referred to as Bream/Perch/[insert name of another kind of fish here] etc. It's a shame, because the central plot of Dr Phibes wreaking a biblically-inspired revenge on the doctors he holds responsible for his wife's death is actually quite compelling. If this had been made as a straight horror film with less of the daft, knockabout humour it could have been genuinely creepy. As it is, the whole thing just has a disposable, throwaway feel to it, despite Vincent Price bringing a bit of gravitas and pathos to it. Passable entertainment for a dreary Wednesday night in October and I admit that I did add the sequel to my rental list afterwards - albeit at the bottom, and it's a long list......

Time out of Joint - The Abominable Dr. Phibes review by CH

At first glance, The Abominable Dr. Phibes, released in 1971, appears the very embodiment of the late-Sixties. A smart Victorian terrace house which, inside, is fashionably decorated in a style akin to the first interior scene of Help!

And so it continues with a strange-faced man (Vincent Price) at the keyboard of a theatre organ while the rest of a band turn out to be puppets. Very strange. And even stranger is that all this turns out to be taking place in the later-Twenties, a fact mostly evinced by a few carriage-like motor cars in the exterior scenes which are also graced by Virginia North whose hooded fur-coat could be something sported by Diana Rigg in The Avengers. This film in fact shares a director and writer of that series.

Nothing is real, and there is a gloss to the horror as Dr. Phibes sets to work, turn by turn, to enact deadly revenge upon the nine surgeons (Terry-Thomas soon vanishes; Joseph Cotten hangs on longer). Phibes deems them all to have conspired in killed his wife upon the operating table when in fact they were battling to save her.

His means of now disposing of them is to re-create the series of fatal Biblical curses, such as frogs and locusts. If this sounds familiar, such a method – deaths in Shakespeare – was the inspiration for a film in which Price starred two years later, after a Phibes sequel. Theatre of Blood is far better.

More slick than sick, The Abominable Dr. Phibes is diverting enough when the wind is rattling the windows and a glass of wine is to hand.