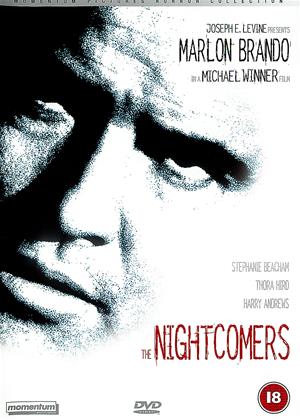 Reviews (1) of The Nightcomers

50 Shades Of Stupid - The Nightcomers review by Count Otto Black

Henry James' 1898 novella "The Turn Of The Screw" is regarded as a masterpiece of supernatural literature, and the 1961 movie based on it, "The Innocents", has gained equally high praise as an understated psychological chiller. The plot is that a governess is horrified to discover that the two young children in her care have not only been exposed to adult sexuality thanks to a scandalously uninhibited affair between two servants, both of whom are now dead, causing the youngsters to behave in ways which, in the late Victorian era, are almost unthinkable. Furthermore, she believes that the ghosts of the dead servants are gradually possessing the children in an attempt to continue their torrid liaison beyond the grave. However, this aspect of things is deliberately left ambiguous, and critics have been arguing for over a century whether the ghosts literally exist, or they're merely a symptom of the main character's own neurotic sexual repression.

So naturally, when a ham-fisted blunderer like Michael Winner decided to revisit the story in 1971, he reckoned the world needed a prequel in which we could see exactly what the two servants got up to that was so shocking it ended up with two children being possessed by sex-crazed spooks (or maybe not). The answer turns out to be that Marlon Brando, 10 years past his glory days, well on the way to becoming the bloated, mumbling self-parody of his final years, and sporting a ludicrous Irish accent, indulged in artfully-shot soft-core sex and some rather comical bondage with Stephanie Beacham, and along the way taught two of the oldest and most naïve young children in the world such sinful mysteries as kinky bedroom antics (accidentally), how to make frogs explode, and atheism, with ironically tragic consequences for himself (the atheism, not the frogs).

This is a jaw-droppingly daft and ill-advised film! The modern equivalent would be a remake of "Batman Begins" in which it turns out that Bruce Wayne's parents died as an indirect result of that time Bruce walked in on them having weird sex dressed as a bat and a playing-card, and they're played by Stephen Segal and Paris Hilton. Possibly worth viewing if you're a connoisseur of ridiculous cinema, but otherwise, give it a miss.