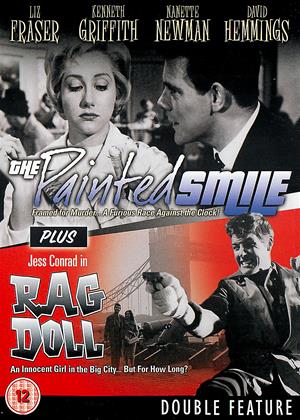 Synopsis:
Odeon Entertainment is proud to release some of the forgotten classics from the Golden Age of British Cinema. Double bill of British crime dramas.

The Painted Smile (1962)
After a drunken night out with the boys, Tom (Tony Wickert) takes the voluptuous Jo (Liz Fraser) back to her place. But as they enter her bedroom Jo discovers that her boyfriend has been stabbed to death and threatens to accuse Tom of the stabbing unless he helps dispose of the body. After arriving home the next morning and remembering very little, Tom learns that he is wanted for murder by the police. In order to prove his innocence, Tom has to stay one step ahead of the police in a race against time to discover the true identity of the killer.
Rag Doll (1961)
Pop star turned actor Jess Conrad plays singing crook Jo Shane who attracts the eye of naive runaway Carol (Christina Gregg) in this film slice of delinquent crime nostalgia. When Carol falls in love with Jo, he uses his charm to turn her against her new-found keeper Wilson (Kenneth Griffith). But when he tries to break into Wilson's home the robbery goes tragically wrong...
Actors:
Jess Conrad, Liz Fraser, Peter Reynolds, Hermione Baddeley, Kenneth Griffith, Frank Forsyth, Christina Gregg, Tony Wickert, Craig Douglas, Nanette Newman, Ray Smith, David Hemmings, Harold Berens, Grazina Frame, Richard McNeff, Gerald Sim, Rosemary Chalmers, Mia Karam, Terence Maidment, Bill Stevens
Directors:
Lance Comfort
Producers:
Tom Blakeley
Writers:
Pip Baker, Jane Baker, Brock Williams, Derry Quinn
Studio:
Odeon Entertainment
Genres:
British Films, Classics, Drama, Thrillers
Countries:
UK

Rent other films like The Painted Smile / Rag Doll

Boy, does this site overuse the word "classic"! Describing this disc as a double bill of "forgotten classics" is half right, because they're certainly forgotten, but that's as far as I'd go. Even calling it a "double bill" is a bit of a stretch; these two B-movies have a total running-time of two hours, so this is clearly a double bill with two supporting features and no main attraction.

Oddly, the film listed first, "The Painted Smile", is by far the lesser of the two. Three young men (including a pre-fame David Hemmings in a nothing part) behave ever so slightly rebelliously in a very early sixties London that isn't swinging yet, where listening to a crooner who makes Cliff Richard sound like Alice Cooper and daring to wear a loud tie are evidence of a despicable lack of moral fiber, and illicit sexual desire gets you involved with people so evil that one of them has an orthopedic shoe, because nothing says "psychopath" like a physical disability! Cardboard characters, not all of whom can act, have an underwritten adventure that feels like an episode from a very old TV cop show, and learn that it's always better to conform to the values of a society that would implode under the weight of its self-repression in the very near future. The only genuinely exciting moment is when you see a police box exactly like the Tardis, and expect the cybermen to show up for the one second it takes you to remember that this is 1962 so it's just a police box.

"Rag Doll", though still a very minor film, is a big improvement, with vastly better acting and far better realized characters, nearly all of whom occupy a moral grey area instead of being good or evil stereotypes. It also does a fine job of conveying that the feelings a pretty, naïve, and potentially exploitable 17-year-old girl arouses in men can be quite complex, and may bring out the best and worst in them simultaneously. Unfortunately the fates of the main protagonists, while suitably bleak, are also paint-by-numbers predictable if you've seen a few American movies in the noir genre. It's fairly watchable, but rather depressing without being all that interesting, and it's blatantly trying to copy an American genre that was already very nearly obsolete, and doing it in a peculiarly restrained British way.

The most notable thing about both films, especially "Rag Doll", is the way they deal with controversial subjects, which must have been quite daring at the time. But nowadays it all seems very dated and tame, and except in a few scenes, both movies lack the grim intensity that proper film noir needs if it's going to work. Probably of interest mainly to historians wanting a glimpse of what being a teenage rebel in London was like just before the Beatles sparked off the revolution that made it fun to be under 25.