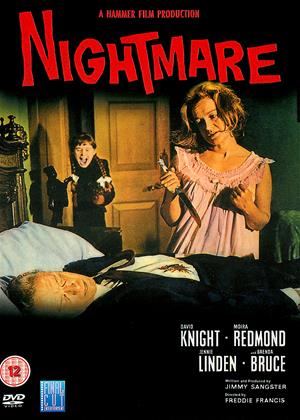 This very atypical and deservedly obscure Hammer film looks so old-fashioned that a few minutes in I skipped back to the credits to see what year it was made, wrongly thinking the date given above must be a misprint for 1954. I suppose the fact that it's in black and white could be a homage to "Psycho", with which it shares some plot elements. But I think it's more likely that Hammer didn't want to waste money on colour film stock for what they knew would be a second-rate film; the lack of well-known names in the cast suggests that too.

If this site allowed half-stars I'd give it one and a half, but I'll go up to two because it's not one-star putrid, just extremely weak. A misguided attempt to reboot "Gaslight" (1940) with a transfusion from "Psycho" (1960), it has the kind of plot an Italian giallo slasher would have handled infinitely better by turning everything up to eleven in glorious blood-soaked technicolour and not giving a monkey's about plausibility. Unfortunately this half-hearted and, for Hammer, surprisingly gore-free non-thriller falls completely flat on all counts. Character and motivation are inadequate or non-existent, and there's absolutely nobody you like enough to care about. The script's only remotely original feature is that the "twist ending" occurs halfway through, and then, when we think the entire plot has been explained, the second half builds up to another even twistier ending. But since both "surprises" are so formulaic you can see them coming the proverbial mile off, instead of twice the thrills you just get a second helping of something too bland for you to want more of it.

A special mention must go to Jenny Linden, a mediocre actress horribly miscast as a 16-year-old when she was obviously in her mid-twenties, causing her immature behaviour and the fact that everyone treats her like a child to unintentionally seem a lot weirder than any of the scripted indications that she's a bit mental. But I'm afraid the only thing about this wearily predictable, poorly acted, and flatly directed psychodrama that really got my attention was the doll which kept popping up all the time because the laziest way to make your movie look "nightmarish" is to have creepy retro dolls lying about. Every time that thing was on screen, I was thinking: "Blimey, that's the least politically correct toy I've ever seen!" Though since the entire plot relies on the assumption that all women are so mentally fragile they'll turn into homicidal loonies if they get a wee bit upset, casual toy-box racism is the least of its sins against the Great God PC.

Not that you'll need an excuse to watch something else instead, because there's absolutely nothing remarkable about this film. It reminded me of a below-par episode of "Tales Of The Unexpected" padded out to feature length. And by the way, it's only got one actual nightmare scene because to portray truly disturbing dreams on film you need a lot more talent than Freddie Francis.