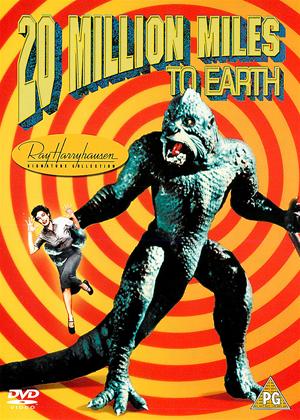 Synopsis:
Dazzling special effects by Ray Harryhausen highlight this thrilling sci-fi extravaganza about a Venusian monster who wreaks havoc in Italy. On its way home from Venus, a U.S. Army rocket ship crashes into the sea of Sicily leaving Colonel Calder (William Hopper of Rebel Without a Cause) the sole survivor...or so it seems, A sealed container is also recovered from the wreck, and when a zoologist (The Mark Of Zorro's Frank Puglia) and his granddaughter (Joan Taylor) open it, the gelatinous mass inside escapes. Overnight, it grows into a horrific monster that has doubled in size. In desperation, Calder calls the Army to help fight the monster, which has taken refuge atop the Coliseum in Rome.
But it will take more than man's weapons to fight the evil forces of the unknown and save the world from destruction.
Actors:
William Hopper, Joan Taylor, Thomas Browne Henry, Frank Puglia, John Zaremba, Tito Vuolo, Jan Arvan, Arthur Space, Bart Braverman, Sid Cassel, Paul Cristo, Noel Drayton, Darlene Fields, Duke Fishman, Michael Garth, Ray Harryhausen, Ronald Hyde, George Khoury, Richard LaMarr, Saverio LoMedico
Directors:
Nathan Juran
Producers:
Charles H. Schneer
Narrated By:
William Woodson
Writers:
Robert Creighton Williams, Christopher Knopf
Aka:
The Giant Ymir
Studio:
Columbia Tristar
Genres:
Action & Adventure, Classics, Horror, Sci-Fi & Fantasy

Reviews (1) of 20 Million Miles to Earth

I watched this a couple of days after watching another Ray Harryhausen film, The 7th Voyage of Sinbad, and it did suffer slightly in comparison. Despite being only a year older than Sinbad, it felt much more dated and lacked the richness of the later film.

Whist Sinbad had a variety of Harryhausen creatures on display, this one has only one, the Ymir. The Ymir is visually impressive and is without doubt the main attraction of the film (as you would expect of a 'creature feature'), although the sound design for it wasn't great. I have read that the sound used for the Ymir was that of an elephant played back at a higher speed, but what it sounded like was a man with a bucket on his head shouting a lot. I think the filmmakers must have learnt from the experience because the sound design for the cyclops in Sinbad was much better. Sinbad also had a very distinctive score by Bernard Herrmann, whereas the score for this film is pretty anonymous and could have been from any number of similar films.

The plot is a fairly rote King Kong/Godzilla hybrid, and the script is pretty ropey. As in Sinbad, I think that the cast generally do as good a job as could reasonably be expected with a daft plot and some weak dialogue - the cast of Sinbad probably had it easier because that film is essentially set in an entirely fantastical realm, whereas this is set in the 'real' world, where the silliness of all the sci-fi hokum is more apparent. My favourite scene is when a select few of the press are gathered together and told that not only has there been a top secret space mission which has landed men on Venus, but that the mission has brought back a new, alien life form.... and they react with all the excitement you would expect if they had just been informed of a minor cabinet reshuffle. I am guessing the director just couldn't be bothered that day....

All of which is not to say that this isn't an enjoyable film - just that in comparison this felt a little more throwaway than Sinbad, which had a bit more going for it to help elevate it above being a mere B movie. The blu-ray has both the original B&W version and the colourised version of the film - I personally prefer the B&W version, even thought the colourisation has been done well.