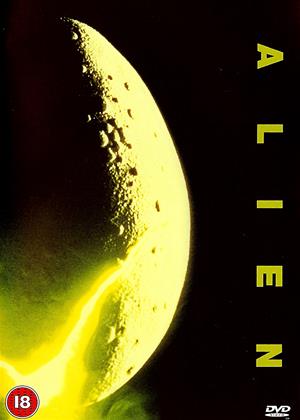 Superb 1970s sci-fi film, never bettered. Despite its reputation, this is not a horror film – there is very little on-screen blood and gore with the sole exception of *that* scene. This film made the reputations of both Sigourney Weaver and director Ridley Scott. Scott went on to make (among other superb films) 'Blade Runner' and the less-appreciated 'Black Rain', both of which use similar stylish dark and brooding visual surroundings shown here.

'Alien' immerses the viewer in an intense, claustrophobic atmosphere of tension, unease and menace which never lets up until the very end. Highly recommended - 5/5 stars

A masterpiece and a game-changer. A science fiction film that's influence cannot be underestimated, indeed it's style, editing and ideas have been much copied since. When this arrived it was an unbelievable experience, not only because of its, now infamous, scenes but also because of its look, its vision of future technology and the sheer tension and excitement and it went onto spawn a hugely popular franchise with mixed results. But as a key science fiction film this remains a benchmark in the genre. In the far distance future a commercial tug spacecraft, the Nostromo, with it's seven crew in hypersleep, are en route back to Earth. The ship's computer picks up an unknown signal and awakens the crew to investigate. On a small, desolate planet they find an abandoned alien ship but one of the crew is attacked by a strange creature that attaches itself to his face and by bringing it aboard the Nostromo they unleash something very terrible indeed. With it's imagery and themes of primeval awakenings, deviant sexual assault and unique designs by the concept artist H.R. Giger this is a film that deserves close and careful viewing. There's a host of things going on here that are complex and very interesting. There's plenty of shocks including a now very famous and bloody scene and plenty of unexpected twists. The small cast are all exceptional: Tom Skerritt, Sigourney Weaver (in her first major role), John Hurt, Veronica Cartwright, Yaphet Kotto, Harry Dean Stanton and Ian Holm. Director Ridley Scott is responsible for two of the most influential scifi films ever made this being the first. It's a must see film, and I recommend having a look at the Directors Cut which adds some interesting character scenes, a significant extra scene which links it neatly to the sequel Aliens (1986) and trims some other scenes to make them more impactive. A modern masterpiece, if you've never seen it then it's worth your time believe me.

By modern standards there is on first glance a lot going against this film today. Not least the extremely slow build up.

However it must be remembered this is the original. A film that spawned countless imitators and copies. Of which only one, the sequel can stand as its equal.

When you consider OBannon and Giger had a massive part to play in the success of this film it says a lot that its Scott who gets the glory. And thats because his direction is utterly masterful.

This film is held together with aerospace grade glue and is near flawless in its execution. And that slow start i mention, like the sequel this is to build the universe and the characters and its done in a way i think few people fully understand or appreciate. Indeed, rumour has it the story of the film is summarised in the opening sequence.

Acting is superb and we have of course Sigourney Weaver acting every bit as well as her character is written.

A fully deserved 5 stars for this one. One of the greatest films ever made and worth watching today more than ever to remove the foul taste of todays garbage from your eyes and ears.

Like its sequel this film is as near flawless as they come.

Oh, it has an alien in and is set in space.