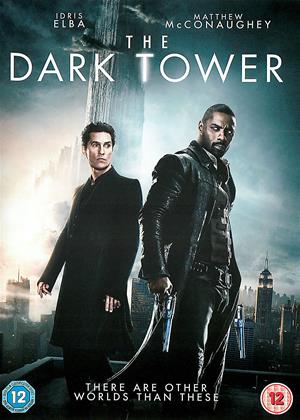 Reviews (16) of The Dark Tower

I'm a big Stephen King film and have just finished book 3 of the 7 book Dark Tower series. Also being a big Idris Elba fan, I didn't read any of the critic reviews before watching this as wanted to form my own opinions.

I'd assumed that as the series is 7 large books, and as they managed to stretch The Hobbit out to 3 long films, this would be book 1 of the series only. How wrong could I be - the film starts effectively halfway through book 3, and in 90 minutes tries to encompass all of the books. They've completely changed the back stories of some characters, combined several characters into one, missed really important characters out of the film completely and glossed over huge important sections of the plot. Essentially this isn't the Dark Tower books at all, it's a standalone film with a few characters named the same as some from the book. It seems pretty obvious that this was at least originally intended to be a much longer film but several bits have just been edited out entirely, so you can't really tell what is supposed to be going on or why. There's no character development, no cohesive plot, it doesn't manage to have it's style in any meaningful sense and if there's a theme in there I couldn't find it.

Do yourself a favour, give this a miss.

I've read the books and really enjoyed them , so I was really looking forward to this. Quite disappointed with it, they missed so much out that really mattered. I thought this would of been just the first film in a series as there was too much to put into this one film. It could of been such a good series of films .

Probably the worst most boring film of the year! - The Dark Tower review by CS

Having never read the books, I didn't know what to expect, I've never read a Stephen King novel either, but have seen some of his classic films from the 70's and 80's such as The Fog, It and Pet Cemetery. I remember his early films being quite good and original, but over the years it seems he's simply chosen to rehash familiar themes and storylines by simply renaming them! This film right from the start is slow, laborious, badly produced, directed and edited! The story line is wafer thin as to almost not exist and the actors have nothing to cling on to in order to develop their parts. There's nothing new, original or interesting here the whole film seemed to be a mash of other films, taking in The Sorcerers Apprentice, Harry Potter and almost any other Sci Fantasy film you can think of that's been made in the last ten years! The ending is a real anti-climax, so unoriginal and as sadly seems to be the case so much nowadays, gives you an ending ready made for the next sequel in the series. Although I really cannot see another movie being made, as this is such a bad film anything else would really have to pull out the stops, how this made it from a book into a film is beyond me, if the book is as and as the film is!

If you loved the books, DO NOT watch this film. It takes a couple of characters and ideas from the books, changes them completely, then leaves you cold and violated by the sheer vulgarity of this Hollywood money making attempt at cinema.

Never read the books - The Dark Tower review by jb

I came to this film with an open mind. Having never read the books I watched without expectation. I found in the end it was ok with some good set pieces at the climax of the movie. However this is a typical hollywood movie which plays it safe, there are a few key pieces of background imformation which are briefly explained. That should of been told right at the begining of the movie.

The problem is Hollywood making the film they want to make as usual to a set formula we seen time and time again.

I really enjoyed this one, Idris Elbe and Tom Taylor really jelled to make a great double act despite the age and culture difference between them, Matthew McConaughey made a really "bad" baddy with (spoiler) one nasty power that literally took your breath away.

Great plot based around alternative universes and time and space / dimensional travel. I would never have guessed it was a Steven King story.

Read the books which are brilliant I also thought the film would be the first of a series so ended up being disappointed. However, did enjoy this it was watchable but not sure if I understood it only because I had read the books.

I didn't know this was from Steven King and I didn't know about the books so came into this with an open mind.

To me and the missus it was just a good Saturday nights entertainment, just sit back, disengage the brain and enjoy it for a stand alone film that is as entertaining as any other fantasy.

From what I've read above, if you have read the books and are expecting a copy, dont bother but if you want an easy going film that is just pure Hollywood Fantasy, then leave the brain at the door and enjoy like we did.

At a time when most films are predicable and boring this one is just simply a really good film, never read the books so am not fussed if like them or not !

Just not that interesting - The Dark Tower review by rh

The Dark Tower series of books has seven volumes. This squashes them into one blah picture. It was almost a straight to DVD movie or, if this was the seventies, straight to TV. Not very interesting at all.

Gave up on it - The Dark Tower review by HR

Expected such a lot from this film as has a wonderful cast in Idris Elba and Matthew McConaughey but it was truly awful. This is the first time we have ever given up on a film but we decided we didnt want to waste any more time on it.

I can already hear the seething of the fans of Stephen King’s Dark Tower series for a film adaptation that condenses a 300+ page book into a 95-minute movie. Here is a foundation fantasy film that skirts by so much of its lore that it’ll easily make the devoted readers cringe and hiss for what was left out. But after seeing so many of these fantasy franchise that stoops their worlds in so many characters, settings, monsters, history, dimensions and planets that require a bible-sized handbook in addition to the books to comprehend, I’m grateful for the diet this picture went on.

Such a simple story doesn’t require a beefy backstory. There exists another dimension (or a world or something) magic and cowboys, where a giant tower protects a post-apocalyptic land from the monsters outside its borders. An evil sorcerer simply defined as The Man in Black (Matthew McConaughey) wants that tower gone. A noble gunslinger Roland (Idris Elba) can’t have that and battles him with the only weapon capable of stopping a sorcerer: a pistol formed from Excalibur. It’s a weapon that has the magical properties to consistently ricochet off any surface and fast enough to ricochet off other bullets already ricocheting. If you think that’s ridiculous, try the tower-destroying machine of The Man in Black, which requires the screams of children to operate.

Jake Chambers (Tom Taylor) is the kid in the regular universe of New York City that becomes the target of The Man in Black. While the secret agents of the villain, dressed in the loose skin like those lizard people of V, it is discovered that Jake more special than the other harvested children. He possesses the psychic ability to telepathically make contact with others, uncreatively dubbed the Shine and bearing an uncanny resemblance to The Shining. Jake teams up with Roland and the two are off on a fantastical adventure through worlds.

The Dark Tower is predictably derivative of other adventure films, which may explain why director Nikolaj Arcel skates by them all so quickly. Jake’s visions and drawings are straight out of The Neverending Story. When he later takes Roland on a path through New York City, it’s the classic fish out of water story where Roland finds himself perplexed by everything from Coca-Cola to hot dogs. The action scenes are straight out of nearly a dozen juvenile fantasies where hordes of tattered and shadowy creeps assault villages with fire. And the moment when Jake falls for the illusion of his dead dad reappearing in dark forest is such an overused cliché of any fantasy film I’m surprised to still it in this day and age.

In one sense, this is a mistake as nothing in the movie can really take off when it’s moving so fast towards that climax of magical powers, gunfights, and explosions. But I’m perfectly okay with the movie not stopping for Roland to explain that animals talk in his world or the mythical beasts that haunt the relics of an old theme park. As the film progresses towards its more fantastical elements, I found myself amused by the film’s audacity to cram so much into its tight running time. Some of the fight scenes are simply adorable in how it stages the most absurd of moments where bodies cartoonishly slam to the floor and smash through bus windshields. The final battle with Elba ricocheting bullets and McConaughey catching them like pebbles is so unbelievably over the top I couldn’t help but laugh, more for its earnest vision than campy effects.

The Dark Tower is not a great movie and most likely a horrible adaptation of a beloved fantasy series. But think about this movie as a whole for a minute: a psychic Tom Taylor teams up with cowboy Idris Elba to shoot magically-charged bullets at an open-shirted Matthew McConaughey. That’s how I’m going to remember this movie, in the same tone of those campy fantasy pictures of the 1980s that were incredible inventive if not over their heads. It’s just too ridiculously committed to thinking of it as anything more than a pulpy B-movie; one that I believe will hold up better over time.