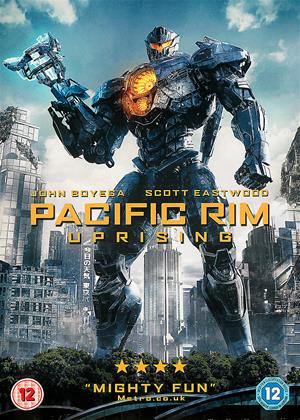 Entertaining enough , but Boyega is getting on my nerves a bit now, fine in the first Star Wars Movie we see him in, but Now he is just smug, and not even that good and has far too fat an arse for sci fi outfits.

As Producer of this picture he is in every scene loving himself too much. The rest of the cast dont get that much screen time so you dont really care much when they all get killed off or hurt as you have hardly seen them .

To be honest it comes across as a Cheap Transformers Movie rip off than anything else, strangely I didnt think that of the First Pacific Rim movie...but this one feels like that .and they even Look like that . Not the best Sci fi move but watchable and entertaining , but not Great .

Very disappointing sequel, script not very good and main character dreadful, worst of them all. After this one I hope no more they have ruined something that wasn't too bad.

I'd read some reviews by actual film critics saying this film wasn't too bad and in one case saying it improved on the original, which is why I rented this sequel. Well, they were wrong, very wrong. It's clunky is every respect and resembles a sub Transformers film, which I didn't think was possible! It just panders to every type of cliche for films of this genre - from the story, to the script and the paper thin characters and is ultimately just annoying. I think maybe I'm over analyzing it really for what it is, but there are far better sci fi monster films out there. Don't waste your time with this.

Film is about the same as first, rating as enjoyable. Possibly not one I would pay a cinema ticket for but enjoyed but enough, to not be disappointed. Need a big battle if they're making another!!

Following the ridiculous Pacific Rim comes an even more ridiculous and boring sequel in which giant robots swap fisticuffs with each other and Japanese monsters while bashing into skyscrapers. It’s a juvenile cartoon that makes even the equally ridiculous Transformers franchise seem like a masterpiece.

The very concept of giant robots manned behind the eyes by synchronised pairs of adolescents (yes, really), whose movements power the robot’s movements, is laugh-out-loud nonsensical. Any talent the cast may have is not on view. The fact that some of the dialogue is in Mandarin as a sop to the increasingly important Chinese market shows what this film is really about. For real masochists, the DVD contains a director’s commentary.

Scott Eastwood should be doing higher calibre movies than this. The director just thinks that if he can do bigger and bigger robots then the movie will be a success. Nope. And there's jus tno way on earth any sort of robot can punch, kick, and throw around another robot without immediate catastrophic damage, not to mention the two pilots inside being thrown around like rag dolls. It was just annoying!

I shouldn't be so critical I suppose. This film is unashamedly aimed at the teenage demographic (and brain dead adults) across the world.

I think the script must have been written by a teenager too - no imagination, some really dreadful dialogue. Extravagant CGI as you would expect but nothing jaw dropping. The cast were unconvincing, uncharismatic and lacking in gravitas. The film came nowhere near crossing any generational or intellectual thresholds.

Dreadful film, but looks incredible on 4K UHD. Great demo disc but that’s about it.

I have no desire to ever watch it again

Worth a watch - Pacific Rim: Uprising review by SH

So just to get it out there, it's not as good as the first movie. It's a bit of a lukewarm rehash of leftovers with a few new ingredients chucked in.

Pros - As it's similar to the original you'll like it because its a Mecha genre movie with Godzilla overtones. Also the acting of Cailee Spaeny is a particular highlight and her interaction with the other cast members.

Cons - It's not a huge leap from the first movie, more of a stop gap to a presumed Pacific Rim 3. The storyline is a bit weak with no real surpises or depth.

Worth a watch but hoping number 3 is a step up

The sequel to Pacific Rim challenges how much one loves the mecha genre if there was any to begin with. While the first movie was a giddy and thrilling spectacle of giant robots battling giant monsters, Uprising presents more of the same with more out-there story ideas that contort the saga further from a popular blockbuster to a genre pleaser for those who dig the camp appeal of Mazinger and Gundam. And as someone who loves the dorkiness of tales involving aliens and giant robots, convoluted as they may be, Uprising has enough pluck and power to narrowly win me over once more.

A few new cans of worms are opened on the Pacific Rim world. After having closed the portal that continued to send monster after monster two Earth, the planet has shifted from a fearful populace to a poor once, struggling to survive on the streets, living off the relics of monsters and robots. We follow two scrappers: Jake Pentecost (John Boyega) makes a living on selling robot parts and Amara (Cailee Spaeny) uses them to make smaller, more versatile robots than the heftier Jaeger bots. While Amara has some real skill with piloting mechs, it’s Jake who the Jaeger program is more interested in, as the son of the previous film’s commanding officer Stacker. He’s brought in to justify the use of Jaegers to combat rogue giant robots, while a competing company is promoting the use of artificial intelligence. And in comes a newer, younger batch of pilots to save humanity with all kid-friendly pluck for children destined to jump into robot cockpits. They need to be trained by Jake and are in desperate need of coaching. Especially when a new Kaiju threat it on the horizon if it isn't here already.

To justify more Jaeger on Kaiju action, the story contorts a weird plot of how the Kaijus make their grand return. Without giving too much away, it involves evil Jaegers, multiple portals, and mind-control of all things. It shouldn’t come as much of a surprise that a sequel with few returning characters does perform a bit of the expected housecleaning to clear the ranks. That being said, the return of the bickering scientists played by Charlie Day and Burn Gorman are still a hoot to follow and play a grander role in the sequel.

The biggest issue with such a script is that while it still echoes the moves of its predecessor, Uprising forces too much into the mix that it becomes downright exposition-straight at times with trying to help the audience keep up with the left-field twists. There are so many so story ideas flung at the screen that it runs the risk of becoming as overly busy and confusing as the Transformers saga. Perhaps, but there’s a key difference between director Steven S. DeKnight’s less inspired film and Michael Bay’s endless cavalcade of chaos.

While Transformers boasts lots of robot action, it’s all a mess of moving parts as blurring robots do battle in horribly staged fight scenes. Pacific Rim Uprising improves, if nothing else, in its special effects of the fighting robots. Thanks to some motion capture and real eyes for how to stage a scene, all of the battles occur during the day and with clearly visible actions that are fun to watch. Mecha junkies will get their thrills filled when a Jaeger uppercuts another Jaeger up the side of a building and later do battle with swords that pierce through their robotic hearts.

If you didn’t dig the first Pacific Rim, I can’t help you here. It doesn’t really improve on the characters, story, or even the mecha and monsters, merely doubling in theatrics to the point of increasing the numbers or adding Super to their titles. But if you just love some mech-on-monster action and don’t mind a second helping that’s a little soggy from being reheated, it’s a decently satisfying serving of mecha leftovers.