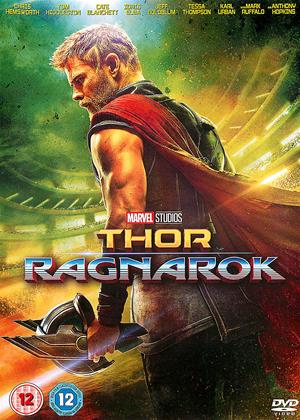 One of the most enjoyable Marvel movies - Thor: Ragnarok review by AS

This film is great fun right from the start. An enjoyable action movie with some genuinely funny moments. Recommended. My favourite Marvel film to date.

Trying far too hard to be funny, it seemed that every character suddenly had the sense of humour of a 12 year old. . If you like the brain dead badly timed humour of an Ant and Dec fronted show then you'll lap this up. Otherwise avoid, as it only encourages them to do more in the same vein.

An entertaining adventure featuring the typical slick Marvel action, more in the Guardians style this time than the rather dire bleakness of the dull Thor 2.

The script here features a considerably higher gag count than is usual for Marvel, some of which actually works (the drunk Valkyrie, anything with Jeff Goldblum) and some that doesn't but spare enough that I was able to ignore (Waititi's fondness for dull-witted character rambling 'humour', see Korg)

One of the more interesting entries in the Marvel back-catalogue.

A good laugh, although felt in parts it didn't want to be. Wanted to see if before the latest avengers film, as i saw Thor was missing an eye, although didn't really need to. It was funny and better than number 2, but not better than 1. Jeff Goldblum was Jeff Goldblum and was hilarious.

Watched Thor Ragnarock and Spider-Man home coming, both very exciting movies well worth a watch, don't know what I enjoyed more, our of the two...!

Service Given by Cinema Paradiso is excellent and I can't fault them.

First Class Service Given At All Times...!!!

I wasnt expecting much with this one but found it funny and entertaining. Where dark world was dull and lacked heart. This has a sense of humour and enjoyment. I gave this film 5 stars because despite a few faults it delivered and left me entertained wanting to watch it again.

If you enjoyed the previous movies you'll be very disappointed with this. It is boring and unfunny, with uninteresting characters. A real shame.

For some reason MARVEL has decided Thor is now some kind of Stand up comedian and have given him a script full of Gags . it actually works and it carries the film from ne laugh to the next which helps as Thor and Hulk could have been a dreadfully Dull movie otherwise ...... Probably felt they also needed to make HULK talk too ,because lets face it HULK is pretty Dull as a character.

However ,it was all very Entertaining and Much Better than I was expecting. I have really enjoyed the other MARVEL movies but wasnt too excited to see this after seeing some of the Trailers for it. Just a shame Loki also appears , his character is so predictable it just wastes time in a movie that could be used to show us something more interesting instead.

more of the same - Thor: Ragnarok review by JD

Pretty much the same as all the other Marvel movies.

Yes its entertaining and they have clearly seen humour (how long as that taken to get into mainstream movies) is an essential ingredient.

Problem is its just the same thing, over and over. Made up with top notch effects, actors and laughs.

I feel superhero saturation is close.

The usual bunch of Marvel cartoon characters exchange banter, muck around with CGI effects and dispatch zillions of computer-generated baddies. The drama-free plot is no more than a peg on which to hang all the computer-manufactured fights. There’s one long fight between Thor and the Hulk that has less fun, drama and reality than a Tom and Jerry cartoon. The climax is a cliché in itself, with each superhero’s fight scene intercut with the others to eke out the unsurprising result of each.

The dialogue is so abysmal it makes you cringe. It took no less than three writers to come up with clichés such as ‘Choose your next words carefully.’ It would be poor comedic fare even for a Dave original. Jeff Goldblum’s ‘hilarious’ clown-like character is so embarrassing you want to look away.

All this is accompanied by the usual bombastic orchestral score, shown up for its dreariness by two uses of Led Zep’s Immigrant Song, which briefly add some much-needed zest to a couple of fight scenes.

Despite some unbelievably OTT American reviews (see Rotten Tomatoes), Thor: Ragnarok is nothing more than typical unimaginative Marvel fare. If this is the future of blockbusters and film criticism, mainstream cinema is in dire straits.

One for the kids - Thor: Ragnarok review by LC

Clearly aimed at the 'Guardians of the Galaxy' market, 'Thor Ragnarok' is essentially an outright comedy movie - I've got no real problems with that, other than it's just not very funny. All that leaves is empty spectacle: CGI fight scenes between various cartoonish characters - none of whom have any real character, depth or dramatic weight beyond providing the next gag line, or 'cool fight pose'. There is no threat or dramatic tension here, as nothing about this cartoon world feels even vaguely 'real'. Kids will love the bright colours and action, but this is ultiamtely a completely empty, mindless movie. Not one of Marvel's better efforts.

The third film in the Thor trilogy is the most divergent, most stylish, and, ultimately, the most fun. It does away with the muddy take on staging Shakespeare plotting with sci-fi dressings in a California surfer vibe. Here is a film that wants to be a big, bright, and bouncing outing that would rather spend more time staging wickedly witty sci-fi adventure than drama stooped in lore and legacy. And for the hefty portions of Thor: Ragnarok that does favor the colorful, it’s a much-improved new coat of multi-colored paint for the hammer-wielding hero.

Chris Hemsworth reprises the role of Thor and has some house-cleaning to do. He must out his mischievous brother Loki (Tom Hiddleston) as the king of the fantasy kingdom of Asgard. Their father, Odin (Anthony Hopkins), is dying and he has some dark secrets to reveal before turning into yellow vapors. It turns out there is a long-lost sister, the evil witch Hela (Cate Blanchett), and she just happens to arrive on the very day of this revelation. Armed with her spiky headdress, she takes her violent control of Asgard and summons an army of her own undead soldiers.

Seems like a pretty standard superhero affair of saving a besieged kingdom, but then there’s an unexpected detour. While traveling back to Asgard to prevent its destruction, Thor and Loki are thrown off course and land on a junker planet. Run by the quirky and maniacal tyrant Grandmaster (Jeff Goldblum), Thor is enslaved and pitted into gladiator combat for the amusement of the people. Everything about this world is a hoot, from Jeff Goldblum’s wacky design of a sci-fi dictator to the wonderfully retro-future landscape, both colorful and dirty. Not only does the feuding chemistry between Thor and Loki continue, but there’s the welcoming additions of the long-lost Hulk (Mark Ruffalo) and the ex-Asgard ally Valkyrie (Tessa Thompson). It’s just such a shame when the film must eventually bookend by heading back to Asgard for the expected showdown.

Even when the film must take the superhero route of an apocalyptic battle where Thor tosses his hammer about and saves his citizens, director Taika Waititi thankfully infuses his picture with enough wonderfully weird charm to make this the most enjoyable Thor movie, low as that bar may be. There’s always some wild visual to showcase, some clever quip to lob into the dialogue, and some rousing action to witness. If a Marvel movie must end with a big battle, Waititi makes it standout with Hulk battling a giant wolf and Karl Urban battling zombies with machine guns. If Thor and Hulk must duke it out in the ring, make it the most hilarious of slapstick displays with brilliant callbacks to Loki’s previous defeat at the hands of the unstoppable green machine. And if the story leads to a junker planet, make it have its own gorgeously dated style of a 1980s vision of the future, complete with a synth soundtrack by Mark Mothersbaugh.

Despite some clunky use of characters, from an understated Anthony Hopkins, to a onenote Karl Urban, to a rather pointless cameo by a fellow superhero, Thor: Ragnarok has more than enough pep and eyecandy to both please the superhero crowd and stand out from the pack. You’ll get plenty of action with Thor and Hulk busting up spaceships, as well as plenty of hilarious segments, most of which involve watching Loki garner even more of his comeuppance. Though I wish the gladitory junker planet was the entire film, the direction and production design are more than enough to keep the eyes dazzled and the expanded universe of the nine realms a little more vibrant past the old-fashioned Norse stylings of Asgard. Where the previous films kept themselves inside boxes, Waititi ventures out further to let us know there’s more to Thor than hammers, melodrama, and kingdom politics. That being said, it’s pretty fun watching Thor lob lightning at his enemies.