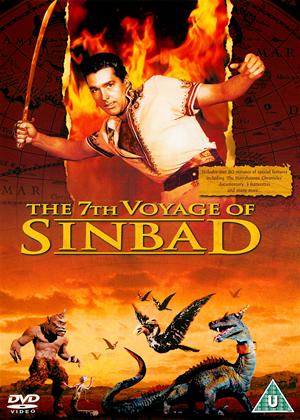 Rent other films like The 7th Voyage of Sinbad

Reviews (1) of The 7th Voyage of Sinbad

I added a few Ray Harryhausen films to my list as I had long been meaning to revisit the hazy childhood memories I had of them. This was the first one that landed on my doormat. I am a big fan of pre-CGI special effects involving actual, tangible materials. I just think the craftsmanship is incredible, and for me the most unrealistic looking stop-motion animation will always be preferable to slick CGI which always feels a bit cold and empty to me.

Anyway, after however many years since I last saw any Harryhausen films (maybe 25/30 years...), the creatures on display here did not disappoint. The cyclops, the snake woman, the roc, the dragon and - of course - the skeleton are all fantastic. The level of skill required to bring these creatures to life and integrate them into the live action still amazes me.

But perhaps the most pleasant surprise was how enjoyable the film as a whole was. I think it would be easy for supposedly 'sophisticated' modern audiences to laugh at the acting, the dialogue and the outdated stereotypes found in this film but I actually think the cast did a really good job of creating the energy required for a fantasy epic of this nature. A lot of the time the actors are interacting with things that are not really there and the performances need to be big and bold to sell this to an audience - it would not be fair to compare what they are doing here to more naturalistic film acting. There is also some really interesting stuff about how the film was made in the extra features and commentary on the Blu-ray, particularly about some of the incredible filming locations and how these were integrated with material filmed on studio sets.

Oh - and I almost forgot to mention the film also has a brilliant score by Bernard Herrmann!

So in summary, there is a lot to enjoy here, not only Harryhausen's monsters.