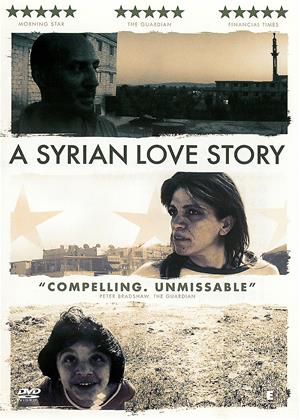 Synopsis:
Comrades and lovers Amer and Raghda met in a Syrian prison cell 15 years ago. When McAllister first meets their family in 2009, Raghda is back in prison leaving Amer to look after their 4 boys alone; but as the 'Arab Spring' sweeps the region, the family's fate shifts irrevocably. Filmed over 5 years, the film charts their incredible odyssey to political freedom. For Raghda and Amer, it is a journey of hope, dreams and despair: for the revolution, their homeland and each other.
Directors:
Sean McAllister
Producers:
Elhum Shakerifar, Sean McAllister
Writers:
Sean McAllister
Others:
Elhum Shakerifar
Studio:
Verve Pictures
Genres:
Documentary, Drama

Reviews (2) of A Syrian Love Story

This film follows the course of events in Syria through the experiences of one particular family, starting with the oppression that led to the failed revolution against the Assad regime.

We see the terrible toll that this oppression has on one loving relationship and on the children of that family. It is just one of the millions of stories that need to be told about the refugee crisis that has seen huge shifts of people desperately trying to escape intolerable suffering.

Sean McAllister does an excellent job of bringing out the common threads of humanity, and also the sheer waste of life and opportunity that our political systems create. It is terrible to think that the Syrian civil war is still going on and that its end will only produce more families like the one seen here.

Very biased one-sided view of the Syrian conflict, more about marriage breakdown though. - A Syrian Love Story review by PV

Hmmm well, this is a documentary best-suited to TV rather than state-funded film by an insider. It's more about a marriage breaking down than a war, and this is not an impartial documentary about the Syrian conflict.

The problem is, the film maker is totally biased. The fact is that many who rose up against Assad were extremists and Islamists, not liberal freedom fighters at all, and we can now see it was wrong to back them. The West should have done a deal with Assad. Better the devil you know. Look at the chaos in Libya to see that.

Too partisan then, and one-sided, typically short-sighted in its support of Arab Spring revolutionaries. If the West had dealt with Assad then Syria would not have been destroyed and its people killed or made refugees. And there is an assumption here that all Syrians should be let as refugees into Europe - something many people very much disagree with. WHY don;t they move east to other Muslim countries eh?

No doubt this sort of thing goes down well at leftwing film festivals though, and this sort of stuff always gets the public funding - the director is an insider used to getting state funding though.

Should have been a TV programme, on Channel 4 probably. Maybe next time make a TV doc about Islamist extremists (who also torture and murder) who now rule in countries were dictators have been overthrown. Maybe make one about the Israel-hating and anti-Semitism is many Palestinian activists.