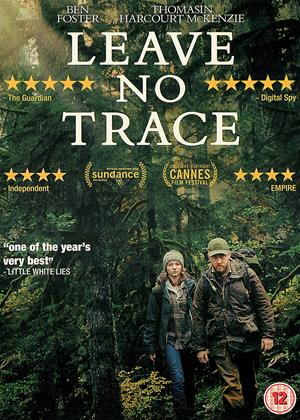 Reviews (26) of Leave No Trace

A little gem ! - Leave No Trace review by JD

Not many films nowadays have no swearing or any bad/ nasty characters.

Beautifully acted by the two main characters but also by all the others, many I presume are not professional actors.

An interesting, and moving story keeps you involved all the way through and it shines a spotlight on a problem I suspect is more common than we think.

Highly recommended, please try this movie, you will not be disappointed.

15 out of 16 members found this review helpful.

Marvellous acting by the two leads, Thomasin McKenzie and Ben Foster, who deliver a totally believable tale about a psychologically damaged veteran and his daughter trying to live a life outside of society's norms. The adjustments and challenges that they face are portrayed sympathetically and while there is a strong melancholic vein running throughout the film it also shows the good side of humans in a positive way. Highly recommended. One of the most powerful and well acted films I've seen in 2018.

14 out of 15 members found this review helpful.

This film is like a good book that you can't put down.

It creates a fascinating, suspenseful tale without any of the Hollywood gimmicks. The relationship between troubled father and intelligent, open daughter is beautifully written and acted.

The woods and the natural landscape becomes a character in the film as well.

10 out of 12 members found this review helpful.

Obviously In The Minority - Leave No Trace review by DH

I should haven taken the critical acclaim for this film as a warning, because philistine that I am, it bored the wotsits off me. The usual arty cliches of angst ridden lead character who says little, moody "atmospheric" shots without dialogue, meandering lightweight "plot".

Sorry, but I didn't get it. Nothing happened, no drama, no suspense, no twists, no real conclusion. It beats watching paint dry, but not by much.

4 out of 11 members found this review helpful.

Beautiful paint but does take a while to dry! - Leave No Trace review by BE

A quietly unsettling and highly unusual presentation from American shores. I wouldn't want to watch it again but was completely drawn in by the very natural acting and the outdoor scenery. The spiders web at the beginning and end of the movie says it all. Well done director Debra Granik.

STUNNING AND UNUSUAL - Leave No Trace review by JF

I can only echo the other reviews!

There is a poignant scene when father and daughter just look at each other without speaking for what seems an age. The silence underlines the bond and understanding between them, where words would have been superfluous.

One of the best films I've seen in ages.

I'd not read or heard anything about this film so came to it completely unbiased. Echoing what (almost all) of the other CP reviewers have said, it is simply beautiful. There is no need for shouting, swearing, action chases, CGI, convoluted 'plot', scenes of torture or people having sex etc. it merely needed two extremely good actors, barely saying anything to each other throughout, to convey the close bond and heartbreaking prospect of the necessity to live their own chosen lives.

A close miss, but a miss none-the-less. - Leave No Trace review by Schrödinger's Cake

I loved the script, acting and the camera work on this film. At times it is so intimate that it feels almost as if you are intruding. But that said, I think it gets the overall pace a bit wrong, which undoes some of the good work. In fact, when I checked, I was amazed that it fits the standard two-hour film model, as it actually felt more like three to watch.

Whilst I’m happy watching meticulous, detailed films, this one just felt slow. A close miss, but a miss none-the-less.

Despite good reviews this was not a compelling view, slow and pointless would be a more accurate description.

If You Go Into the Woods Today....you might not find anyone. - Leave No Trace review by DS

Viewers are treated to marvellous unromanticised scenes of Will and Tom’s life in the woods and this gives you a strong base to the story and to the father, daughter dynamic. Skilfully weaving into the narrative, post-traumatic-stress, unyielding family loyalty and the need for true solitude you know we are on an interesting and perhaps harrowing trip.

The deft handling of director Debra Granik in the pacing and telling of the story ensures that you are never really sure where we are heading as we troop along with the main characters and also some impressive cliché swerving is done as no character in the film is given a black hat. Everyone is doing what they think is correct for a reason and the reason makes sense – you know, real life.

There’s a documentary feel to the filming and style, and Leave No Trace is all the better for it, bringing it’s naturalistic acting to the fore even more.

Tackling such diverse topics, particularly the post-traumatic-stress parts, with subtlety and without resorting to ‘flashbacks’ or teenage histrionics is something I can only applaud and a refreshing change and restraint to this type of story. We do not need abuse and evil authorities for the trip to be engrossing and entertaining.

The cast is uniformly natural and the leads Ben Foster and Thomasin McKenzie having a real and honest father-daughter dynamic that in other hands may have faltered.

In the end Leave No Trace is a love story between a father and daughter were death, trauma and huge changes in their lives ultimately cannot weaken the love.

Worth a viewing but if you’re looking for Rambo or teenage ‘oh my god’ angst look elsewhere.

There is an unsettling silence and coldness to Leave No Trace, where a father and daughter don’t have to say much even though we know they should. The two seem to be the most at home in nature, away from the civilized world the father finds too noisy and busy. But there’s a desperation and separation between the two, distant even when together, a world between them when mere rooms push them away. There’s so much rattling around inside them that simple writing their story off as a family wandering around the forest is a major injustice.

Ben Foster plays Will with great quiet and power as a PSTD effected veteran. He resides in the woodland areas of Oregon with his 13-year-old daughter, Tom (Thomasin McKenzie). They live a life of survival and seclusion, trained not only to make do with the land but also hide from anyone seeking to take them away. They only go into town to secretly seek a means of helping others hiding out in the woods with them. They’re unsuccessful, however, and are found by authorities, taken in for care by social services.

Now here is where the film could have crashed and burned. It could’ve just as easily been a fish out of water story about Will and Tom trying to adjust to civilized society. But director Debra Granik (Winter’s Bone) always keeps the story a personal one, too tragic to let everything spill out. Take for example the scene where Will is given a series of yes or no questions to answers. Some he answers easily, others he strains with, reasonably so with such questions about how you feel about your life and if you feel that things are left unresolved. Don’t we all? But Will strains these words because he still doesn’t feel all there, even when the state believes they have given him a purpose.

We keep thinking that Will is just on the cusp of some big rant about society, commercialism, and the destruction of nature. He is given a rural job of cutting up trees for a living, something that clearly wears on him as work without ethics or purpose. From his brow and his eyes, he hates this life of destroying the world and going home to a TV he won’t watch. He’d rather be in the woods, where he feels free and at peace with the world.

But Tom knows this can’t last, not so much for him but for her. She’s had a taste of both worlds and it’s clear which one she favors, not so for the mere artificiality of the one with warm beds and clothing. It’s not easy to depart from one’s father when they know they won’t connect but Tom’s departure comes with a quiet realization with a side of bitterness. One of the most powerful scenes features her making this connection when she learns from a kindly old woman about how to care for bees, to earn their trust that they won’t sting you. Subtle and somber, where her expression upon parting ways carries more in the eyes than dull words ever could.

Leave No Trace becomes incredibly engrossing for how it always holds our attention with how long Will can keep his closet closed and how long Tom will go along with his quietness. The gloom and coldness can be felt throughout where you’re just about on the verge of tears for this small family. Will’s tears come easily while Tom’s have been hardened as cold as her feet when hiking through the chilly wilderness. Even when I knew what was on the horizon for their strained relationship, there’s an undeniable, unshakable aspect that I wanted to see where they would go next, how they would live, and if they could live together.