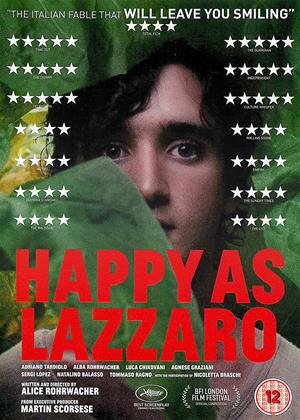 Reviews (5) of Happy as Lazzaro

The first half of Alice Rohrwacher’s deliberately disturbing new film, takes place in a rugged valley somewhere in central Italy miles away from anywhere. The residents, an extended clan of sharecroppers, grow tobacco, lentils and chickpeas on land belonging to an aristocratic family. Though there are a few signs of modernity — a few electric lights, some motorised vehicles, a mobile or two (but no signal) — the feudal structure and pastoral rhythms of existence in this place seem timeless. The farmers, exploited and oppressed by an ancient social order, are sustained by their stoicism and solidarity, but Rohrwacher isn’t in the business of picturesque nostalgia or political piety. She draws from the past (tapping into literature and folklore as well as film) to forensically interrogate present conditions.

The film, a perfectly balanced combination of neo-realism and magic realism, centres around the 'happiness' of the title character (Adriano Tardiolo), a kindhearted young man of uncertain parentage. His contentment is genuine, in spite of his harsh circumstances; both simpleton and saint in the 'holy fool' tradition, he stands as an exception to the general human tale of treachery and domination. He is happy because he is good. By contrast, the noblewoman who owns the land — the Marchesa Alfonsina De Luna (Nicoletta Braschi) is brutally exploitative, whilst insisting that her power over her tenants, who are perpetually in her debt even as she appropriates the fruits of their labour, represents the natural order of things. While the workers mostly despise her, and engage in small-scale acts of resistance against her and her overseer, they are powerless to change anything: exploitation is as much part of the landscape as the trees and rocks, and a distinct change of scene half-way through the film merely leads to the replacement of one form of organised cruelty with another. For just as we’ve accepted the semi-fantastical parameters of Lazzaro’s world, notably his unlikely half-secret friendship bond with the Marchesa’s son, Tancredi (Luca Chikovani), our perspective suddenly changes. We suddenly see the landscape from above and hear an ancient folk tale in a woman’s voice, and the film takes a double swerve, into both a harsher realism and more explicit magic.

A rich sense of mystery pervades the film, and we find ourselves trusting the teller even when we don't fully understand the tale or know where it’s going. What makes it a great film though is the piercing clarity of Alice Rohrwacher’s vision. Even at its most fatalistic, the old cinematic neo-realism was grounded in an idea of progress, in the leftist faith that after feudal paternalism and predatory capitalism a better, more humane future could be imagined and struggled towards. The eclipse of that faith has had consequences for politics and also for narrative: if the passage of time merely led to one form of injustice being supplanted by another, the possibility of a happy ending, or an ending of any kind, seems out of reach. And to this end, the tragic final scene of “Lazzaro” is devastating but also fully convincing. An instant classic.

Lazzaro rises above. - Happy as Lazzaro review by RhysH

This is a beautifully shot, enigmatic film, the simplicity of the story underscored by a complex social narrative, a discourse on wealth and poverty.

The first half conjures up images of Ermanno Olmi's "The Tree of Wooden Clogs".

Adriano Tardiolo plays Lazzaro with studied ease, his face gives nothing away but it is not the face of a simpleton, as everyone around him implies, it is the face of a young man who observes the world around him and transcends its awfulness.

Worth Watching - Happy as Lazzaro review by KB

I would give this a 3 & a half . Mainly set in remote Italian countryside It gets more absorbing as it goes along & it makes you think a bit at the end. It's goes at it's own pace but it is involving & affecting all the same & it moves into the realms of fantasy but without any fantasy effects.

Lost its Way - Happy as Lazzaro review by AA

Interesting film to start with, but for me it lost its way and the second half of the film had me confused at times as to just where its was going.  I did wonder if there was a dream sequence at play but the ending left me confused.  A 2.5 rating would have been fairer.

Unusual - hooks you in - Happy as Lazzaro review by MM

Others have explained more fully their views of this film. I began, after a slow start, to really warm to this excellent film - well acted with intelligent, insightful themes and narratives. A most unusual and quite mesmerising film - definitely recommended.

Happy as Lazzaro is a film that is perhaps too innocent for its own good. It’s grander theme is one of how man has lost spirituality for the more shiny yet empty ambitions of capitalism. However, in trying to make its way towards the familiar and meaningful goal, the picture meanders and stumbles around trying to find its voice.

The titular Lazzaro is posed as an ordinary young peasant, doomed to a dreary life he ambles about as a sharecropper on the farm of the sinister Marchioness Alfonsina De Luna, aka Queen of Cigarettes. He runs across the young noblemen and son of Marchioness, Tancredi, who has a proposition for him: Stage his fake kidnapping. It’s a classic move of trying to attain some ransom money and since Lazzaro and Tancredi form such a strong bond, they may just pull it off. That is if they can convince Marchioness if the kidnapping is real, a task which may be harder than it first appears. Through a series of mishaps during their stunt, Lazzaro ends up knocked out and awakening years later, when the farm has changed greatly after a police raid. Ever the honest believer, Lazzaro is tricked by some robbers to do their bidding. Elsewhere, Tancredi has become a major success but not quite the success one would expect from his family fortune.

This is the kinda Italian film that positions itself as awkward and aloof enough to float by on its surreal atmosphere, making it no surprise that it was awarded the Best Screenplay award at Cannes. Sure, its central message is quite clear, but it’s more about its artistic game of Operation that struggles never to touch the sides and set off the heavy-handed alarm. And there is something admirable about that. I kinda dug how Lazzaro is posed more as a passenger on the rickety train of capitalism rather than the formed hero who dashes towards the brakes. He’s both pitiful and sweet in this regard, posed as someone too simple to be a danger yet too dim to read the room. There’s a remarkable moment towards the end which encapsulates how un-hero this character truly is, rushing into a situation that would make him a rebel and going horribly, horribly wrong.

Yet there’s a whole lot more to this story that never feels as fully realized. The corruption of agriculture making way for a new wave of the same. The uneasy shifting from the traditional to the modern. The violent desperation of wealth that can turn the working class into pulp. All of these aspects are unique and yet they’re only given a mild glaze upon a mostly lukewarm vibe of a picture. We only feel so much for Lazzaro as we do our selves in such a context, mostly divorced from his blankness in his motivations.

At the very least, Happy as Lazzaro is a well-made film on a technical level. The tracking shots are absolutely astounding, the cinematography gorgeous, and even the twist is well executed. But in its attempts to avoid the overt, the film seems to become lost at times almost as much as its protagonist, milling about to find some meaning that is dangling all around. And there’s a certain madness to watching that just-out-of-grasp vibe throughout that makes Happy as Lazzaro perhaps more frustrating than it need be.