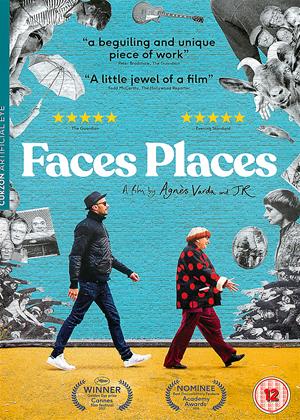 Together they embark on a voyage around France creating stunning works/installations as they go and cross fertilising both ways between the generations of artists as they go.

This is their story, and a delight filled one it is.

Agnes died aged 90 in March 2019 and this film together with "The Beaches of Agnes" 2008 makes a fitting legacy for someone at the heart of the post WWII French New Wave Cinema in the 60s (and incidentally, as a friend, one of only 6 people to attend Jim Morrison's funeral). A life well lived, for sure the new generation epitomised by JR will carry the baton forward.

A playful but profound record of a collaboration between veteran film director Agnes Varda and the photographer JR.

It feels as if the film has been put together from a random assortment of encounters in (mainly) rural France, though there is also a leisurely sense of a coherent journey.

The huge b/w images they produce are magnificent in themselves, and the accompanying interviews only add to the impact.

The interplay between Varda and JR is full of charm and teasing humour, with an interesting filmic twist at the end (no spoiler here!).

A documentary of a collaboration between two artists separated greatly in age whose project to record rural France in portrait photographs becomes something much wider, about understanding, creativity, humanity and history. The device of printing huge portrait images and pasting them on the buildings with which the subjects were associated - their workplaces, derelict homes etc - becomes a way of presenting passing time, memory, or political statement.

For almost the entire film I had a big smile on my face. The interaction between the the two photographers was lively and charming, and the oversized photographs were astonishing. Haven't enjoyed a film so much in ages.

We watched this film mid-covid time. What a heart-warming and thoroughly evocative movie. Agnès Varda has long been a favourite, and this beautiful swansong maintained our feelings about her work. Her relationship with JR was so well observed, he an equal throughout the film, and his work should be more widely recognised. An outstanding movie, fully deserving the five stars we have given it.

Quirky very enjoyable art film documentary following a unique collaboration between a young French photographer who creates giant size images of his subjects, and the much older (but still young at heart) film director Agnes Varda who is a delight. It's also a film about the ordinary places and people of France. In French with subtitles. Some 'extras' also worth a watch before or after the main film.

This quirky, indy film of 2 photographers of different generations and their random collaboration of portraits. Their creative views differ but find a way to play and do justice to the people whose portraits they take. Sometimes I thought the photos unremarkable, but it was the human connection, the celebration of ordinary working people. I think of the 19th century French painters like Courbiet who first explored les paysans, les ouvriers. These are not just figures labouring in a compositional landscape, they are the landscape blown into giant proportions and their individuality celebrated with heroic proportions. Pasting the photos onto buildings, containers and vehicles creates ephemeral yet powerful images. The miners pasted onto the empty shell of their row of houses is moving. Wives of dockers tower defiantly on a stack of containers, and the real women emerge like Lilliputians from their own Gulliver images. JR's treatment of the 89yr olf Agnes Varda's features is tender and her appreciation that he will carry her torch forward.