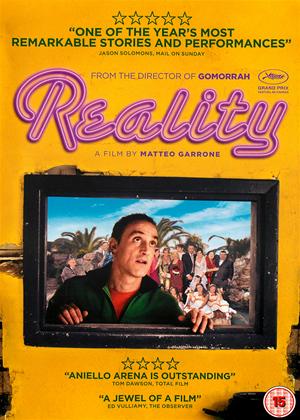 Reality Leaves a Lot to the Imagination... - Reality review by PV

TV is a monster, and reality TV is its deformed psychotic twin: this is the conclusion to reach after watching the poisonous effect of reality TV, (in this case, Big Brother), on a poor fish seller in Italy's poorest city (Naples).

The film starts slowly and so you need to stick with it. There's also an incomprehensive subplot about robots (which counts as one of the scams the key character has on the side).

But when the story gets into its stride, we see the poison of hope of being on some dumb reality TV show starts gnawing away at a man's soul. The effects on his family and means of making a living are also explored.

I suppose this movie falls into an old trope: that of 'be careful what you wish for.' So it could be compared to many an old folk tale, fairy tale, morality tale etc.

Ultimately, this film is also a study of delusion, paranoia and mental illness. And how human greed can destroy a man.

But really, it's one of the best and most interesting satires about reality TV ever made. In the top 5. (Truman Show is #1).

A strangely comic Italian drama about a fishmonger’s obsession with reality TV Reality is almost a twisted fairytale, with the mostly loveable but considerably pitiable hero fighting against the odds to achieve his dream; but this is far from a Disney story and the psychological intensity of Luciano (our fishmonger played by Aniello Arena) is layered in a forceful darkness that has the potential to boil over into the most unpleasant of consequences.

Managing to avoid the conventions of a social commentary Reality resides more in the bizarre and kitsch than anything else; with a fishmonger who seems to awake one day suddenly determined to get onto the Italian equivalent of Big Brother the film touts the satirical tagline “Follow your dreams” and uses the distorted views of celebrity and reality to drive its narrative forward.

A character driven story the film is also full of fantastic visuals, the loose and fluid camera work of the late Marco Onorato, who also worked with director/screen writer Matteo Garrone on his earlier works Gomorrah and the Embalmer, brings that fairytale magic that epitomizes hope to the screen whilst Garrone’s own use of darkness and shadows gives an almost impressionist feel to the film’s visuals.

Other fantastic contrasts, including the hyperactive encouragement from Luciano’s niece against the wary uncertainty of his wife and Luciano’s own excited and brooding demeanour before and after his audition, fill the film’s runtime providing ample opportunity for uncomfortable comedy and dark internal (an physically external) reflections on the nature of reality. With the strong story and fabulous acting by lead and ex-convict Arena it is no wonder the film was award the Palme d’Or at last year’s Cannes Film Festival and its release is now eagerly awaited by fans across Europe.