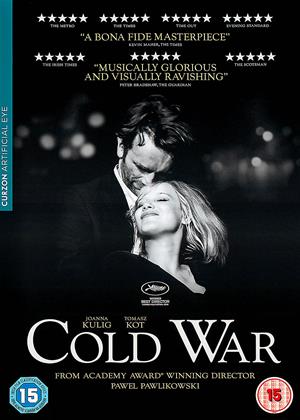 Well like the previous film by this director which won the Oscar, I believe, my reaction to this film is 'MEH'.

It's moderately interesting - about the awful time when the Soviets and Communism were in charge of Poland and Eastern Europe, and oppressed and bullied people just as badly as the Nazis.

Funded by lottery grants, Film4 and other state funding - it's all watchable though hardly exciting.

Basically a thwarted love story - and I hated the ending (no spoilers).

Well-filmed and that's why it gets 3 stars.

It's a love story with a difference, it is stripped bare of the usual cliches and padding that make up the average film. As such it stands out as unique.

This black and white film is very sharp in blu-ray and with good contrast to all the beautifully composed shots.

In particular, mention must be made of the soundtrack, filled with a wide range of music (performed, not background incidental stuff) from classical to jazz to obscure folk, in fabulous quality and with great use of the surround channels. The train sound effects are superb. Many of the scenes are silent except for ambience, and it works so well.

The story is well told with a good pace and has a great mixture of action, and it is absorbing.

We rented this film after hearing Mark Kermode rate it highly, and we were so delighted to have found it.

A beautiful, but dark, love story in black & white - Cold War review by Philip in Paradiso

This film is an arch-love story. In the ruins of post-war Poland, Wiktor and Zula fall deeply, obsessively and destructively in love. As performing musicians/ artists forced to work for the Communist propaganda machine (as members of a folk troupe), they dream of escaping to the West. One day, they spot their chance to make a break for freedom in France.

On one level, there is something predictable in the way that the love story between the 2 central characters develops. On another, the film is full of surprises and the lead actress is simply amazing and stunning, in terms of her presence and sensuality on screen. Somehow, the use of black & white enhances her charm and beauty, and gives the film more depth and elegance.

My problem is with the 2nd half of the film, which I do not find entirely plausible in terms of the storyline. I cannot go into details because it would be a spoiler. But I simply cannot see the 2 characters reacting in this kind of way in real life, also given the broader political and social-economic context at the time (the 1950s).

It is still a beautiful and intensely romantic film that I would certainly recommend, which you are unlikely to forget.

Brilliant and engrossing but no Hollywood ending!! - Cold War review by PS

If you like "Ida", you'll like this, and one of the actors appears in both films. Extraordinary b/w photography, and gives an historically accurate picture of Poland just after the War, and the ideological demands of al the Ostbloc countries at the beginning of the Cold War.

Should have got an Oscar, but probably simply too dark for the Glitzerati.....

This black and white movie is well worth the various Oscar nominations it has just received in January 2019.

Intense and sad, so fancy gimmicks, just a good screenplay and I loved it.

What a lovely, throwback of a film! The gorgeous b/w cinematography enhances the sense of watching a classic love story from the 1940s or 1950s.

The editing is superb and there is not a moment of wasted screen time in this pared down sweep of passion.

A strange little movie about a love story which starts after the Second World War and carries on over many years. Akin to historic black and white movies of the last century, this is a bleak presentation without any humour and flits about from one European country to another. The acting by the two leads is faultless as are the authentic scenes of a post war Europe. Although quite gloomy and non uplifting, seamless directing makes this film relatively watchable.

Worth A Watch - Cold War review by IG

A good, but, not great film, that holds your attention and is worth a watch. Delivers a very authentic period feel, with very capable direction and acting, far from boring.

Subtitles are a let down, small font, white characters often against a light background, and not always on long enough to read in full.

lovely filmed romantic plot, but unbelievably convoluted and wholly unbelievable- especially the second half and the ending

Don't normally write reviews but this film is over-rated. Director's previous film, Ida, was excellent. Here, the political stuff is OK, & the black & white photography is competent -- surely we can expect that! The problem is that there is no chemistry between the star-struck lovers & their relationship is unbelievable & indeed irritating rather than engaging. Who cares.

So the older man makes a fool of himself over a younger, bruised-looking blonde with a past. But what's in for her. He is quite dull, specialised in silent vacuity & spends his life carrying round round a battered suitcase. Her sulky, moody behaviour gets tedious. It's one of those films where you keep thinking -- why would anyone do that? Eg., why would the man risk life imprisonment by returning to Poland to be with a moody brat who has already rejected him & tried to emasculate him. I was fast-forwarding from half-way.

This film really drew me in, and the first 2/3rds are fantastic. But in the last third I didn't understand, or even believe, the behabiour of the female lead, and then it started to annoy me. And the ending was an anti-climax, probably because of this.

The look and music in the film are really wonderful - the camera lingers on captivating faces and scenes, and the music, which is a key part of the story, is quite brilliant. The film gives a really great sense of time and place in post-war Poland and Europe.

This film is definitely worth a watch, and if you can stick with the female lead's actions, then you may even love it.

Director Pawel Pawlikowski is quickly becoming one of my favorite directors of the decade. His previous film, Ida, entranced me with its desolate beauty of finding yourself in the black-and-white, 4:3 world of a chilly Poland. Cold War serves up as another prime example of how Pawlikowski touches on the deepest sensations of passion, isolation, and faith. And while Ida was very quiet and contemplative of the past, Cold War exists very much in the present of its story with love never fully realized and music that carried the era.

Taking place during post-war Poland of the 1950s, the film follows Wiktor (Tomasz Kot) and Zula (Joanna Kulig). Wiktor is part of assembling a state-sponsored folk music group to boost the morale and entertainment appeal of the country. He quickly becomes infatuated when Zula comes in for an audition, regaling him with her heavenly voice. They hit it off well as the ensemble takes off, passionate love made between organization and singing.

Then their relationship takes a harsh turn when the intentions of the singing group shift. If their songs can favor Communist and Stalinist propaganda, they’ll be rewarded with a grander tour. Wiktor doesn’t like this shift but is overruled. As a result, some singers quit and Zula is urged by the ex-performers to act as a spy for those that despise the direction the group and the country are taking. Clearly, this group is becoming toxic to both their politics and their love, leading them to desperate plans of running away together. These plans will not come to be not from outside forces but a greater sense of personal frustration.

The two will meet up years later as different people. Married, struggling, and bitter. The love for each other is still there but how can it go on? After everything that has happened in their country and to them, going with the flow and refusing to fight the current, they remain as the ships that continue to pass each other. Romance always seems hidden, kept warm in the confines of their hearts and locked doors, never to be fully embraced by a world they and others have constructed to disallow what would seem like an obvious relationship meant to be.

Similar to Ida, Pawlikowski’s direction always has a sense of where the characters feel overpowered by their environment, making their personal journeys for trying to understand themselves seem all the more tough and engaging. The harsh shadows and cramp nature of the spaces they occupy, as well as the aspect ratio the film was shot in, always keep the film more personal and moving than being a historical piece. The focus is not on Communism and Stalinism, merely an ingredient of what led to a troubled and tearful romance that always hit a pothole before making that turn towards lasting happiness.

Cold War spins such a tragic romance with amazing cinematography that takes in the dark chill seeping in from every spacious nightclub, stuffy bedroom, small train, and lonely alley. There’s a brilliance in the tease of this love that wasn’t quite meant to be, where the climax takes a bittersweet turn towards what the couple feel is their only escape. Even with some flashy song-and-dance numbers, including one performance by Zula in a very happening club, there’s always a quiet to the presentation, abundant with whispers of a love that Wiktor and Zula fear is a taboo in their own sense of protection. And it’s that slight sensation within their many chance encounters that gives the film such a thrill for showcasing how internal and external forces push us away, even when we want to be close.