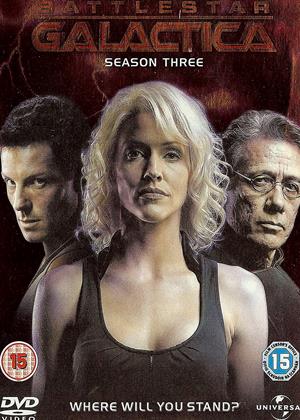 I was sceptical as to how good Battlestar Galatica would turn out to be, but it continues to improve. This third season sees new twists and characters arrive on a regular basis. However the writers keep you guessing as to where things are going next and are not afraid to dispense with staple characters. It all adds up to a dramatic experience and one that has you rushing for Season 4.

Series two of Battlestar Galactica ended on an even intense cliffhanger than series one. When we last left the Colonial Fleet, they had established a colony on a planet they dubbed New Caprica. Life was fine for a time before the Cylons caught up with them, forcing the Galactica and Razor Battlestars to retreat until a strategy can be informed against such overwhelming odds. The aftermath that follows made for the most intriguing arc of the series.

New Caprica’s occupation by the Cylons is a fascinating observation of the nature of totalitarianism and the desperation it breeds among the powerless. Cylons now dominate the colony and hold the humans under strict domination. The remaining Galactica crew left on New Caprica wage a resistance against the Cylons, secretly keeping their plans of rebellion hidden, biding their time until they have enough resources to launch more offenses. One of those offenses turns out to be a suicide bombing, an aspect that made the series deeply controversial for evoking a biting commentary on the current events of the war in the Middle East.

Initially, this controversial take turned off some fans, as though BSG was some escape from the real world and not a gritty observation on the nature of war. In retrospect, however, it’s this kinda writing that really made the show so much more than just standard sci-fi space opera antics. Great science fiction like Star Trek challenge societal ideals and make one think more critically of the world we occupy. This kinda relevant subject matter is just good television for a program as operatic and intense as BSG and perfectly in line with its thematic elements of questioning morality and ethics amid starship battles.

It is during this arc that we get to see a lot of amazing changes with the characters. Colonel Saul Tigh loses his eye and becomes committed to dirtier tactics when it comes to foiling the Cylons. Commander William Adama shows his aggravation by trying to command a fleet in one of the most impossible of fights but also showcases the most daring maneuver of the Battlestar Galactica: jumping directly above New Caprica, dispersing Vipers, and descending towards the planet at an absurd speed before jumping again. Captain Lee "Apollo" Adama also gains some weight and tact as he attempts to assume control of the Razor and realizes just how tough his father’s job can be. Starbuck also gets to kick way more ass than in any other season.

The New Caprica arc wraps up pretty early, however, and it isn’t long before the Colonial Fleet is back more or less where they started, venturing through space while looking for their new home. A lot of these episodes falter by meandering and finding not as much to do with the characters besides wandering with developing personalities outside of combat. One of the longest episodes of the season features the Galactic crew engaged in boxing matches, their minds lingering to flashbacks of their lives before the fall of Caprica. This is a decent chance to better explore the characters but not a whole lot of extra baggage is revealed here and we’re mostly just getting to watch these characters lock horns in the ring for a bit.

The rest of the season is mostly lukewarm episodes until some major shockers are revealed towards the end of the season. First, there’s the shocking death of Starbuck that deeply surprises for coming almost out of the left field. Starbuck always felt like an essential part of the show so it was the greatest of tragedies to watch her go. As if that weren’t shocking enough, the very last episode of the series drops some heavy bombs. We learn that Jimmy Hendrix’s All Along The Watchtower becomes a familiar tune for Cylons. We learn about four more Cylons aboard the Galactica, leaving only one left to reveal in the show. And the very last shot gives us a preview of the planet the fleet will one day find and come home. Now THAT is how you end a BSG season.

Series 3 is like a reverse sandwich, where the real meat is at the beginning and the end. There’s still some great action and the characters get loads of time to develop, as well as being thrown some meaty bones with great arcs. It is one of the longest seasons and the meandering nature can be felt during these collective of episodes most of all. But it also harbors some of the best and essential episodes of the series. This may in fact be the weakest of the four series but still manages to be a thrilling experience.