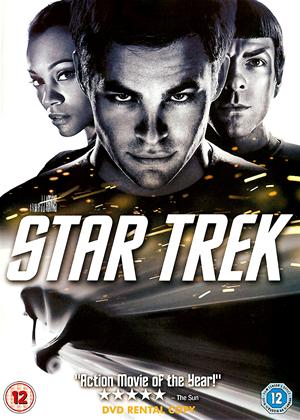 A slick reboot of a tired franchise. - Star Trek review by CP Customer

Putting aside the Star Trek theme this is a great sci-fi action film in its own right, it starts off with a fast paced impressive action scene and doesn’t really let up for the entire two hours running time. The production is slick; the pacing of the film is spot on with a nice balance of action, character development, emotion, tension, occasionally peppered with light hearted moments. There’s no doubt this is a film which will divide opinion. As someone who isn’t that much of a Star Trek fan I thoroughly enjoyed every minute of it, and while you naturally associate the characters of Kirk, Spock, Bones, Sulu, Uhura, etc... with their iconic original counterparts it’s not long before you do warm to the new actors inheriting those characters. There’s no doubt Star Trek purists will probably hate it, while the film pays homage to its origins it does ignore major historical elements of the original series and while the storyline is entertaining it’s also full of silly plot holes which are never explained or resolved. Those criticisms aside this is still an enjoyable, entertaining and visually impressive film which reinvents what was a tired and slightly cheesy franchise.

Star Trek gets the Star Wars treatment in this entertaining prequel to the Star Trek TV series. The younger versions of the characters are very believable in a film with a solid storyline - even if it starts getting a bit difficult to follow about half way through when two versions of the same character appear after a bout of time travelling.

I was disappointed by this movie. We were promised a witty tale of the early years of the Star Trek characters and I was expecting something a bit different from the usual inter-galactic gun-firing. Instead, it was more of the same, but with younger leads. Had we seen more of Kirk & Co actually being cadets at Star Fleet Academy, watching their personalities, strengths and weaknesses develop -- which is the film I was expecting -- it would have held my interest, especially with a good script. This didn't.

Too much is asked of our suspension of disbelief, too. While I could cope with most of the confusions of time travel, the idea that Spock could go back in time and have a mind-blowingly banal conversation with his younger self, was absurd. I was also distracted throughout by the ease with which an academy cadet was able to assume command of not just any old ship, but the Enterprise, with not a single voice raised in dissent. But then, I found Chris Pine's whole authority-flaunting swaggering maverick schtick tiresome after about 5 minutes. I did like Zachary Quinto's quiet Spock, though, and could have wished Simon Pegg as Scottie, with his rather too good accent, could have made an earlier appearance.

So all in all, if you like watching spaceships zip around firing at each other, and young men posturing, you might enjoy this. But if you were hoping for an original, well-written movie which would shed light on our favourite tight-jerseyed beamers-up, don't bother.

and I hope not the final outing for this incarnation of the star trek franchise. Visually stunning, with space battles and action sequences that rival those of any of the previous movies or indeed surpass them, and a cracking audio soundtrack and sound effects that will make your ears ring!

On the whole good (if not great performances) and I do wish we would have seen more of Scotty as played by Simon Pegg. Spot the subtle Kirk impression by the lead actor as he copies gestures etc etc of Shatner. It's subtle and you may miss them! I reckon this is the reboot that the series needed and cannot wait for the sequel.

Oh and may I say best performance has to be Zachary Quinto as Spock, superb!

J.J. Abrams brings his customary visual flair and ability to create accessibility to the Star Trek franchise, in what is a successful reboot. This is the best Trek adventure in light years, but that’s not really saying much really. Fans of the genre will lap it up and those in need of a shallow romp will be relieved at the lack of traditional Star Trek diplomacy and customs, instead focusing on action. Despite the hype Star Trek is good but nothing more, yes it delivers on special effects and its epic portrayal of space, but the plot is full of holes, which prompted that old Hollywood trick. You’ll know what when you actually see the film, as a dynamic is called upon to get scriptwriters out of a loophole. For the most part I could not shake off the feeling that this is Top Gun in outer space with Kirk playing Maverick, a young and over confident know it all, pitched into combat whilst still in school. It’ll be interesting to see where the franchise goes next.