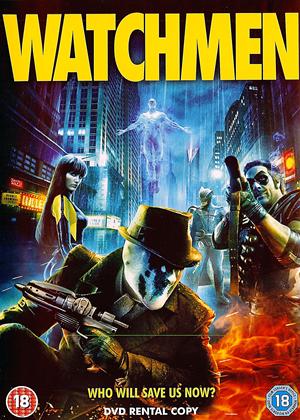 A courageous and faithful adaptation of a classic graphic novel. - Watchmen review by CP Customer

For those who are fans of the original ‘Watchmen’ graphic novel you’ll be hard pushed not to enjoy this film. Not only has Zack Snyder managed to transfer the iconic novel into a credible film, it’s arguably the most faithful adaptation of any Alan Moore graphic novel to date. There are minor differences between the novel and the film, the comic book within a comic book idea is dropped, a couple of small sub-plots are missing, a couple of minor characters are omitted and a few key scenes are slightly different, though even Watchmen purists will find it hard to object to these changes. The biggest deviation from the novel is the ending; without spoiling it, the cause of the ending is significantly different, though the actual outcome is the same, though within the context of the film I actually preferred the new ending over the novels original ending.

For those who haven’t read the graphic novel, this is very different kind of superhero film. It’s almost like a mix of a traditional superhero film like ‘Spiderman’ and ‘The Dark Knight’ and a dark violent film noir like ‘Sin City’, though at the same time completely unique in its own right. The basic plot of the film is based around an alternative view of history in which superheroes have become an accepted part of life. The superheroes have varying degrees of powers, some age normally as humans and retire while others have extended life spans; some are glorified vigilantes while others have true superpowers. After the assassination of JFK, Nixon is elected president and enlists the help of superheroes in bringing the Vietnam war to a swift end in favour of an American victory. Set in 1985 the world now perpetually exists in a cold war crisis against the Soviet Union where nuclear war is a continual threat. And after a repeal of presidential term limits Nixon is elected for a third term in office, where he promptly outlaws masked superheroes branding them as vigilantes. After a superhero named ‘The Comedian’ is murdered a plot emerges that someone is trying to eliminate and discredit past a present members of the Watchmen. Led by the masked vigilante Rorschach a remaining few set out to prevent their own destruction while at the time uncovering a far more sinister plot. If you’re expecting an easy to follow popcorn flick, you’re going to be disappointed. The story is slow paced complex and feels every minute of its 2 hour 40 minute running time. The film is also fully deserving of its 18 certificate, it’s violent, gory and very much aimed at an adult audience. Overall, ‘Watchmen’ isn’t a perfect film and proof that a good book doesn’t necessarily transfer into good film, though you have to admire Zack Snyder’s adaptation of a novel which many, including legendary director Terry Gilliam and writer Alan Moore deemed as unfilmable, and if you’re looking for a superhero film with depth, character, great special effects then this is well worth renting.

The underbelly of superheroes - Watchmen review by AC

I read the graphic novel years ago and was looking forward to seeing this in Blu Ray.

The film itself is intriguing. I'd love to say it's beautiful film, but the pervading mood of darkness and decay is all consuming.

It's a long film (it's a long story so what do you expect) but well delivered. I just wish that the disk had played properly.

A stunning comic book adaptation but strictly for adults. Super heroes for the real world age. Misses a bit of fizzto make it a truly great movie byt is enjoyable and realistic

How super do you like your supermen? - Watchmen review by Schrödinger's Cake

Whether you love this film or not, pretty much comes down to how you feel about comic book adaptations.

For some, this is only ever going to be a slow, tedious film. For others, there awaits a faithful portrayal of the rich depths that can be found in the original graphic novel. Beautifully-flawed characters, struggling with the same daily life we all do, whilst harbouring secret identities and almost limitless super-powers. It's not a film for everyone. But that frankly isn't a bad thing...

I don't normally write reviews, because most films these days are average or good.

This film is very long and ultimately tedious. Not at all in the same league as Marvel, Star Wars, Star Trek, Lord of the Rings, or just about anything else Sci Fi or fantasy I have watched in the last 5 years.

Avoid, and spend your life elsewhere.

I watched this movie in cinema and found it unbearable at the time but saw positive reviews so I tried watching once again if I wasn’t in the mood at the time! Even looking at it from window of comics book, I couldn’t convince myself that I was wrong. The dialogs and narrators are so empty and ..... watch it for 3:35 hour!

I'd seen bits and pieces of this before, but never really sat down to watch it end to end. At about 3 1/2 hours long, it's a serious commitment.

It's very dark but I love that.

If you can slightly put aside the cold war paranoia (though it is a running theme), it is an awesome film.

At Last - A Subversive Superhero Film - Watchmen review by GI

The Superhero film genre has become arguably one of the most popular cinematic film genres in the last fifty years and it continues to grow. So it was inevitable that films that seek to subvert the genre and the narrative tropes would come along eventually. Most that have looked into the genre as a social phenomena have often opted for comedy as a way of understanding the appeal but Watchmen, based on a popular graphic novel, attempts to look at superheroes as flawed, as essentially people with power and how it corrupts or emotionally damages them. Set in an alternate 1980s where superheroes emerged in the 1940s and who then spawned a new generation that take on the American Dream and open it up for scrutiny. Here the heroes, known as The Watchmen, have inevitably become political and corrupted. Assisting Richard Nixon to stay in power, ensuring that America wins the Vietnam war (indeed making Vietnam a new state of the USA) until eventually the public begin to turn against them so some opt for obscurity and retire to private life, and some publicly become good Samaritans, the most powerful, Dr Manhattan (Billy Crudup), helping the USA to build a new energy system. With a nuclear war brewing between the US and USSR, one of the most violent of the Watchmen is murdered which brings others out of retirement to find out who's behind it. The superheroes here are all unique creations although they are based around the DC comic book heroes, Dr Manhattan is the Superman of this world for instance, but they are viewed here as violent, morally flawed, emotionally as conflicted as normal people and shown enjoying fighting and killing and having sex. There's a convoluted plot on offer here that is quite involved and there's plenty of very gutsy violence on offer which does make the film very exciting. Overall this is a very clever look at the genre and cult of superheroes and although the film is epic in length and quite complex at times, it is a bold, entertaining and stimulating film. Repeated viewings reveal lots of details that are not immediately obvious the first time of watching

Saw the trailers and read the reviews and thought this would be a great film. However I bitterly disappointed with the pace and constant flashbacks.

This is a great attempt to adapt a graphic novel, but areas of the novel should have stayed in the novel, thus making the film about 45 minutes too long.

Maybe shorter and in a more graphic novel style (such as the Frank Miller adaptations) would have made this film more watchable.

Some good special effects. I wasn't keen on the swarm of ants on the face look. Quite distracting initially and then after 10 minutes quite annoying. Lots of superhero effects, but these are so frequently seen that there should be a good plot, suspense, action and drama beyond that. There isn't.

This is an ambitious movie, that expands into sizeable proportions. Unlike many of the comic and graphical inspired films of late, Watchmen features character development and backstory. Snyder has tried to cram everything into the script, with mixed results. I did enjoy following the main characters and the original setting, which was refreshing compared to many generic releases nowadays. As a fan, Synder it seems was too emotionally attached to the Watchmen, but as a viewer some material should have been removed. This is a huge beast of a film, with a longer directors cut also available.