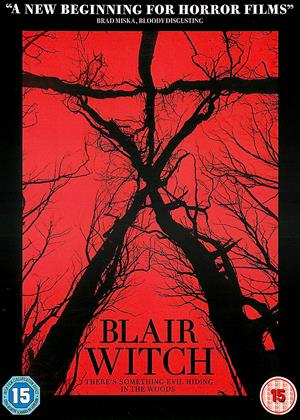 Synopsis:
Helmed by director Adam Wingard, 'Blair Witch' goes back to its found footage roots 20 years after James's sister and her two friends vanished into the Black Hills Forest in Maryland, while researching the legend of the Blair Witch, leaving a trail of theories and suspicions in their wake. The film documents James (James Allen McCune) and his friends Peter (Brandon Scott), Ashley (Corbin Reid) and film student Lisa (Callie Hernandez) venturing into the same woods, each with a camera, to uncover the mysteries surrounding the 1994 disappearances.
At first the group is hopeful, especially when a pair of locals Lane (Wes Robinson) and Talia (Valorie Curry) offer to act as guides through the dark and winding woods. But as the endless night wears on, the group is visited by a menacing presence. Slowly, they begin to realise the terrifying legend is all too real and more sinister than they could have imagined.
Actors:
Callie Hernandez, James Allen McCune, Brandon Scott, Wes Robinson, Corbin Reid, Valorie Curry
Directors:
Adam Wingard
Producers:
Keith Calder, Roy Lee, Steven Schneider, Jess Calder
Writers:
Simon Barrett
Aka:
The Woods
Studio:
Lionsgate Films
Genres:
Horror, Thrillers

Back in 1999 we were all a lot younger. Then, the found-footage genre was virtually unknown, and ‘The Blair Witch Project’ all but introduced it to us. Meeting with critical acclaim and box office success upon its release (albeit helped by a carefully orchestrated internet build-up), it was a phenomena that spawned countless other found-footage productions of variable merit. Now 17 years later, does this second sequel emerge as Daddy to the genre, or is it just another shaky webcam outing? The answer is pretty much both – it would be grossly unfair to expect it to provide the same level of hype or impact as the original, and indeed it does not. But it is very enjoyable.

James (James Allen McCune) leads an expedition into the legendry woods to locate Heather, his sister, who went missing in the original. Of the group, poor Ashley (Corbin Reid), more than most, has reason to regret her decision to partake in this venture. Her spreading foot wound provides the goriest moments this film has to offer, and yet ultimately, nothing really comes of this, other than to make us wince.

Why does James wait 16 years before trying to find his sister, and what reason would he have to think that she is still alive and in the woodlands after all this time? He was 4 when she disappeared, so perhaps his parents insisted he waited until maturity hits him before he embarked on the mission, but a word explaining this would have been appreciated.

The group are a fairly agreeable bunch – certainly they are fairly attractive, which is a concession for mainstream films now, but they are not the catwalk fodder we have been ‘treated to’ in other productions. And yet, where we got to know only three of them in the original, and they were all fairly strong characters, here there are more of them and naturally they have to share the screen time which means we care less about them as individuals. Perhaps Peter (Brandon Scott) stands out the most: initially heavily sceptical of the mission (and understandably, because local boy Lane’s (Wes Robinson) sincerity is sometimes a little intense – although Peter is equally flawed in being so blatantly scorning of him) he nevertheless succumbs to growing fear.

Of the original, the most effective element was knowing that each subsequent night the lost teens spent in the forest would provide terrors ever worse than before. Here, that is not an issue, because frighteningly, the night never ends, throwing the characters into disorientation. Something achieved very effectively here is their hopeless situation – for all they try and do to escape events, we know they may as well just lay down and die. The poor sods.

Towards the end, once they find the abandoned building (that according to investigations, does not actually exist), everything is thrown at the production: the haunted house, disembodied screams, a thunderstorm and manic confusion.

The subtlety that made the original so terrifying is sadly not in evidence here. Instead of the distant rustling in the trees and the possibility of human cries, everything is turned up to eleven – the creepy effects and the hysteria are all loud and all-surrounding. By the end, we are treated to some almost organic sounds suggesting the Blair Witch is all-encompassing, the house’s corridors comprised of ‘her’ innards. This and the endless night scenario expands on the hallucinogenic supernatural events prevalent in the unfairly lamented ‘Blair Witch 2: Book of Shadows (2000’). Here, the climactic maelstrom is chaotic yet nicely frightening and leaves the story over for now but not disallowing the idea of a sequel. I hope we see one. This may be flawed, but it could have been one heck of a lot worse.

Hmmmm. wel all i can really say is ..Its Better than the First movie, and in the same Home made style , unlike the second one which turned it into something a bit more mainstream.....This one follows on from the First Blair Witch Movie, basically looking for the lost camera crew / sister of main character in this movie.

Other than that its just more of the same , at least this time we actually get to see the Witch .

As I write this review, I’m looking at the action figure design for the witch in 2016’s Blair Witch. It’s a skeletal creature with long hair and tattered loincloth, wielding an axe. This is a very generic design that could easily blend into the multitudes of forgettable movie monsters. You don’t exactly see this character in the movie; only from a distance as her presence is muddled in blurs and darkness. It’s a little reminder about what can make a great horror movie and primarily what made the first Blair Witch movie so popular: less is more.

Blair Witch exists as a modern horror update to the phenomenon of The Blair Witch Project. Did the camcorder technology look too cheap in the first movie? Now there are earpiece cameras and flying drones to get all sorts of shots out of this found-footage format. Were there not enough actual scares in the original? Now there is body horror, killer trees, flying tents and loud jump-scares. Is one doll made out of sticks and hair not creepy enough for you? How about dozens of them, larger in size?

I will give the movie credit in that there’s a reason for these flat, young characters to be out in the woods. James is the brother of the girl who went missing in the previous Blair Witch movie and he aims to find her in those woods where the mysterious footage was last recovered. He brings along a group of friends and enlists the aid of two locals to help him cover the woods. They’re all very much prepared with plenty of equipment, GPS-tracking earpieces, walkie-talkies to keep in contact and enough cameras of all size and format to film Bigfoot. And, of course, the Blair Witch will nullify all their preparations to frighten and slaughter all of them.

The scares are pretty much your standard affair for the recent glut of found footage horror movies. The camera goes all shaky as our characters scream and dash through the woods. The audio goes silent before something spooky loudly makes its presence known in the woods. There are some good ideas here to generate scares as with getting lost in the woods or venturing into a haunted house during a thunderstorm, but they’re more interesting on paper. What would help pull along the frights would be some characters we care about, but the script, as with the scares, pulls the most minimum of character development. It’s the same old format of typical buddies who start off the movie chipper and goofy with partying and all end up dead by the end. One crafty kill worth mentioning: it turns out those stick dolls are actually voodoo dolls.

Blair Witch doesn’t so much expand the indie horror picture as it does smear it with a thick coat of $5 million. Memories of watching George Lucas’ special editions of Star Wars come to mind where the filmmakers attempt to update previous works with enhanced special effects. Perhaps the filmmakers of The Blair Witch Project didn’t want it to be a grainy minimalist production, favoring instead a rollercoaster ride with blood and the loud booms of a shaky cameras. Director Adam Wingard (The Guest, You’re Next) attempts to make something more of out of Blair Witch, but no more than any modern horror picture would deliver. After being treated to a year of creative scares from the likes of Lights Out and Don’t Breathe, Blair Witch comes across as a lazy update, believing that showing anything on the screen is better than fearing what’s not there.

It’s amazing how this sequel/remake takes a fairly light premise of a movie and manages to add nothing all that unique to it. I didn’t really learn anything new about the Blair Witch from the picture that I didn’t learn in the first movie. And, judging by the action figure of the witch from the movie, maybe there isn’t anything to learn or worth coming back to with this series. Some mysteries should remain as such, less we face Blair Witch Origins.