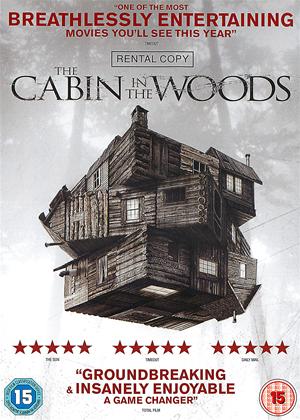 Rent other films like The Cabin in the Woods

Reviews (4) of The Cabin in the Woods

I give this film 3.5 stars rounded up to 4, because despite its wit, sharp script, interestig premise and snappy dialogue, good visuals etc, the pomposity of the ending spoils the movie for me.

The first half hour and hour are the best; the rest delves into unnecessary mataphysical spiritual territory. That's a shame really and the movie would have been better without foolishly veering down that path in the final minutes.

As a parody and pastiche of horror movies (especially the wonderful Wrong Turn) it's great fun. The characters - especially the stoner - are great fun too, with some sharp lines.

The underground lab scenes initially confuse, but then it all comes together like mind and brain connecting as it dawns on everyone (incl the audience) what's happening.

Fans of blood and gore with like the final half hour - me, I didn't really need that. But the Grand Guignol is fun anyway and suitably modern in its in-yer-face blood n guts. I actually saw some of this as comedy, especially all the references to past movies, though I'm not sure others will.

This movie is basically a horror version of The Truman Show - though it's less intelligent and original than that movie and I have no idea why people are using the word 'genius' about this film. It's a good fun movie, which is great, but that's it!

It is clearly aimed at teenagers - but sneaks in a lot of intelligence that will go over many of their heads, especially with dialogue unclear and action so fast I had to rewind and play again to see and hear everything!

Many I am sure with just watch for the gore - and there are some genuine jump-out-of-your-seat surprises too!

There is also enough intelligence here for more demanding viewers, so all in all, a movie wel worth watching. 3.5 stars

Comedy not horror - The Cabin in the Woods review by JH

A cliche-twisting more-comedy-than-horror take on the stock 'teens got to the woods and die' horror trope.

Stellar cast all around, I particularly enjoy Whitford and Jenkins' double act, and wit-laden dialogue abounds: no surprise anything this smart would involve the ever-flourishing Drew Goddard and Joss Whedon.

Just a pleasure to watch.

Oh dear - The Cabin in the Woods review by CP Customer

Seriously, I was hoping that it might be a spoof style film (with it having elements of all the quite famous horror style films) maybe American Pie meets Blair Witch meets Scream, but its not quite funny enough to be a spoof. Its got the same level of gore as stuff like Buffy the vampire slayer and angel (no surprise given its Joss W) so its not as though its too gory for non horror folk, I just felt that they kinda missed opportunities in parts, I was hoping that behind the zombie family would be a bit of a deep and meaningful story with perhaps a bit of guts behind it, but instead it was just a bit silly really.

Overhyped - The Cabin in the Woods review by AR

This film came out shortly after Avengers and l think everyone must have had a hard-on for Joss Whedon. The film received huge critical praise for "reinvented the wheel" and "taking horror in new directions". Despite the interesting central idea and addressing the cliches in a witty way l felt very underwhelmed and thought the film was really nothing special.

Swept up in the critical hype and high expectations l really took against this film. It wasn't till a second viewing that l softened up a bit.

It's best if you come to this film knowing as little about it as possible to reap as much reward as is possible.

The film wants to send up and pastiche the horror genre. Though it tries to, in the end it ultimately falls short. Stuff happens where l expected it to and...oh god, they-are-not-using-them-again!

3 stars - a film with some interesting ideas and a good script. Just doesn't hit the heights it tries to.

The Cabin in the Woods review by Alyse Garner - Cinema Paradiso

From the creator of Buffy the Vampire Slayer TV series comes a seriously delayed horror movie that pays homage to all the greats that came before it: Cabin in the Woods takes all the tropes and stereotypes of horror movies from the last thirty years and uses them to tell a story you think you’ve heard a thousand times.

A group of college kids travel to stay in an isolated cabin by a lake in a beautiful part of the woods somewhere in the mountains, before they’ve even slept a single night in the place however they stumble upon a basement full of the forgotten treasures of past – and distinctly creepy – occupants. Reading a page from the diary of a young girl eventually causes the resurrection of an insane hillbilly family with a taste for torture. As you can image from here lots of blood, guts and gross zombie murders follow.

This seemingly unimaginative story is interspersed with unexplained shots of a secret underground science lab in which a group of techies place bets on the outcome of the student’s little vacation; all the while watching it on hidden cameras. Herein lies the secret genius hidden in Cabin in the Woods.

Without spoiling the fabulous twist and even more fantastic ending – which was so unexpected I still didn’t believe it once the credits began to roll – I can promise fans of the horror genre are in for a treat, not only spotting references to their favourite movies and some classic movie monsters but also the sheer indulgent pleasure of watching a horror movie written and directed by an honest-to-god horror enthusiast.