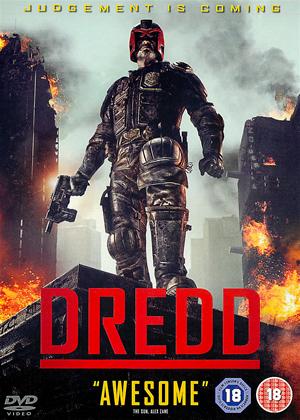 Super-violent - just one day in the life of Judge Dredd. No wimpish Hollywood 'superheroes' here :) - Dredd review by RP

At last - a 'proper' comic-book film, rather than the wimpish so-called 'superhero' Hollywood Marvel comic characters. And it's 18 rated, not some cleaned up version for the kiddies market.

Based on the character from the British comic 2000 AD, a British-South African production, a NZ actor (Karl Urban) playing the deadpan Dredd. Super-violent, lots of blood and killing, in other words, just an ordinary day in the life of Judge Dredd.

Vastly better than the mediocre 1995 film with Sylvester Stallone, I enjoyed this - I think it got the character about right. And no, he certainly doesn't take his helmet off. If I have one criticism it's that the Peach Trees tower block scenario isn't futuristic enough. Also there's a little too much f-ing and blinding from the 'perps' for my taste.

I understand that possibly because of poor marketing and an insistence on releasing the film in 3D to most screens so missing out on the bigger 2D market, the film lost money at the box office. Let's hope its video release recovers some of the cash, because I for one would like to see more of the same.

5/5 stars - highly recommended to those who like the genre.