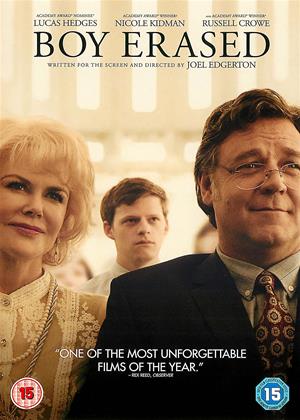 This movie is probably necessary, and based on a memoir too, BUT when watching it I realised it would only strike a chord if you lived in the very religious states of the USA. We do not really have the same Christian culture in the UK and I doubt there's much gay aversion therapy here - maybe via some evangelical churches of African ones, and as for Muslims in the UK and other faiths, I think being gay is pretty much a no-no, so maybe we needs some movies about that bigotry.

I also pondered the fact that actually in most of the world (all Africa and Asia) gay people don;t get sent to therapy - they get killed or imprisoned, so maybe we need more movies about that (one African film THE WOUND is superb - I recommend that). 'Gay' is only a lifestyle in the West; in most of the world, it's a behaviour as it was in most of Western history.

It's all imbued with that self-obsessed pity-party therapy-culture that has seeped into all areas of American (and now British) life, and can be very preachy and rather precious as a propaganda movies.

I also saw the act 3 twist coming a mile off - it's been the same plot twist in so many similar movies (Scum; Another Country etc). No spoilers.

I just didn't believe the journey of the mom character here and disliked the stereotype of making the dad - ie the man - the baddie. Enough already! Plenty of women are massively homophobic esp as they tend to be more devoutly religious than men all over the world.

Russell Crowe as the devout preacher dad character drawls it in, and is more believable - and he looks like he's had all the pies too, so I wonder if the actor gained weight for the role. Maybe he needs some pie-aversion therapy eh?

Also, there are no black faces in this movie. Why? Hollywood is always parachuting in African Americans, even to play roles of people who in real life were white, so why not here eh? That is necessary because most African-Americans would, in any referendum, vote to make homosexuality illegal according to polls - 70% of those in California according to reports I have seen. The ethnic communities in the UK, too, are much more homophobic than the average white person and yet that is never ever mentioned or debated, and I have certainly never seen any films highlighting the issue. WHY NOT?

All in all, a necessary if rather worthy movie and way too long, so 2.5 stars rounded up.

Brings the book to life - Boy Erased review by TB

I read the book, which is from the real life memoirs of Garrard Conley, before seeing that it had been made into a film.

The film visually brings the book alive and adds the required emotions that the book didn’t quite capture fully for me.

The acting of the main character, Jared was very good and even though at times the film felt slow paced, that slow pace was perfectly used to allow you the time to imagine and feel what Jared must have been going through and trying to process in his own mind.

It’s not an amazing film but it’s worth a watch and certainly worth seeing what went on and is still going on in America and so many other countries around the world.

As a gay man myself, it filled me with anger to know that so many countries and people are still so backwards in their thinking and acceptance of homosexuality.

This was a really insightful film and I found the performances really good. Lucas Hedges was great (although would say he was better in Ben Is Back). The film is rather sad and makes you think how awful it must of been for people going through this situation.

Harrowing film of Gay Conversion Theories that run amok in the BIBLE Belt of the USA.  The film did at times tended to drag but the telling point for me was when Nicole Kidman challenged the owner/leader of the therapy centre for his qualifications!