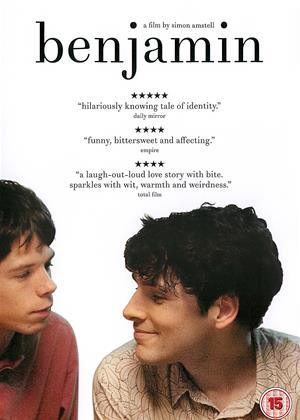 one of the dullest, most boring film, I have had to watch in years, a complete waste of a rental.  After about the first 15 minutes I was finding it very hard to stay focused to what I was supposed to be watching, was so lamentable!

Very dull. Wasted half an hour waiting for a laugh then gave up and watched an episode of World on fire, a laugh a minute by comparison.

I have to agree with all the poor reviews - this is an awful, amateurish film. It's as bad as the end of year art shows it parodies - that was the only bit of this where I even smiled. It's just over an hour yet feels so much longer because it is so very dull.

I assume it was made coz Simon Amstell has some rich and famous film industry mates. Just shows what a mistake cronyism can be then.

I like Simon Amstell as a presenter and also GRANDMA'S HOUSE a BBC2 sitcom.

I suspect this whole idea, a rather limp and twee gay fantasy, may have worked better as a gentle BBC2 late night sitcom.

I suppose some young gay guys coming out may relate to it. No-one else will. And even for them, no-one gets naked much.

The lead actor is a mumbleton who does not seem to be acting.

Truly awful, and so trendy it's disappeared up its own Hoxton hole somewhere in its body...

For a decent gay romance watch ANOTHER COUNTRY maybe or BEAUTIFUL THING. Not this.

1.5 stars rounded up to 2, solely on account of the music and half-decent French boy performer who is clearly posh Paris stock with a first name like Phoenix.

If Benjamin had been about Stephen (Benjamin's failure of a standup comedian BFF) this would have been more interesting. Unfortunately, this slice-of-life comedy-drama focussed on a listless drip of a filmmaker dithering about a courtship with a French musician. Sadly, it's all too realistic yet fay like the characters;the people (on the whole) depicted in this movie are the kind of people most of us would run a mile from. So it's an unpretentious film about pretentious idiots who only gain clarity momentarily. Joel Fry (as Stephen) nails his depressed, lost comedian - he'd revisit a Richard Curtis-version/reading of this character type in Yesterday (that film sucked). Jessica Raine is also superb but groteque...

This is disposable and pretty unlikeable because of the prats in the story, not due to any shortcomings by the actors or the filmmakers.

This is a very like-able if predictable film plot - the most annoying thing for me, being hard of hearing is the absence of 'subtitles' - the dialogue was absolutely lost most of the time. Always worth watching anything with Colin Morgan of course, but just couldn't hear him :-(

Despite having stellar reviews from the major film publications, I have to agree with the thoughts of pretty much everyone who has posted here: this film is dire.

I originally rented this as I'd watched one of Simon Amstell's stand-up shows (Do Nothing,) which was funny in parts, even though the angsty shtick gets a little wearing after a while. But when you compare that show with the film, the angst is almost subtle at the live gig.

The lead character is just insufferable. Pretty much every sentence he says, he either immediately says something to make you think "Why did he say that?" or "Please shut up, I'd rather go and talk to a plant." Couple that with the fact that when Benjamin interacts with anyone else, he will keep interrupting them, or start talking over someone then when they stop, he stops, then when they resume their sentence he will interrupt them again.

I think that Amstell believes that that is where the comedy comes from, but when you get half an hour into a film and you are at the stage where you don't want Benjamin to open his mouth, there isn't much point in continuing watching.

The only shame for me was that some of the interactions and small intimate moments had the potential to, had they been directed by someone else, be beautifully realised. But instead, we get a protagonist with verbal diarrhea, who incessantly worries about ruining situations which he then sets about ensuring comes true.

My score has no bearing on the actors technical ability, as I blame the directing and screenplay.

Total waste of time - Benjamin review by BE

I don't think I have ever watched such a boring and inconsequential movie.   It had nothing to redeem itself. Awful.

Not sure why Simon Anstell bothered to write most of Colin Morgan's lines as most of them were unintelligible due to his poor diction and Northern Irish accent.

Appalling mumbling - Benjamin review by as

We gave up on the film, as the main character appeared to have marbles in his mouth, rendering him almost impossible to understand.

As there were no subtitles, it was difficult to follow the plot.

It seems to be the way now that some actors seem to mumble their parts, sadly making them all but impossible to understand.

I'm a great fan of Colin Morgan but this film is dire. Call me old-fashioned, but I expect to laugh or at least smile at a comedy. Pointless storyline and much of what Morgan says is incomprehensible.