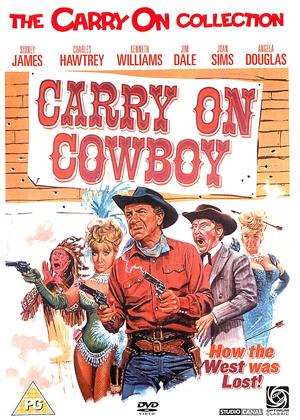 Reviews (1) of Carry on Cowboy

This innocently naughty romp is from the Golden Age of the Carry On franchise, when its trademark blend of smut and slapstick had reached its apex and hadn't gotten stale yet. Most of the regulars are present and correct, and the production values are as high as they ever got, meaning that their "Wild West" is clearly not very far from London (if you're familiar with trashy British cinema from this period you'll spot some very familiar locations, such as that row of trees the Rumpo Kid rides past, just like the Witchfinder General did in a movie I saw last week), but at least they're outside the studio and the Texas town is a proper set.

Unfortunately it's not one of the truly great Carry Ons, which would arguably be "Cleo", "Up The Khyber", 'Screaming" and the underrated "Don't Lose Your Head" (not an official entry in the series, but later retitled to make it so). The British of yesteryear were infinitely more inhibited about anything to do with sex than Wild West outlaws were, so the constant embarrassment and innuendo seem a bit out of place.

There's also the problem of the acting, which is very variable indeed. In other Carry On costume dramas where the characters aren't meant to be English, they mostly don't bother with accents - who knows what the Ancient Romans sounded like anyway? This time round, Kenneth Williams makes an ill-advised attempt to sound like a Texan, and he's so stridently annoying that he nearly sinks the film single-handedly. Every scene he's in is an endurance test, and he's in a great many. This is odd, because almost nobody else tries to sound American. Sid James, who did some serious movie acting before he got typecast as a lecherous comedy character, and played a few tough guys who weren't supposed to be funny, is far more believable as the Rumpo Kid using his normal voice than he would be with a terrible cowboy accent, and Charles Hawtrey as Chief Big Heap makes no attempt whatsoever to be anything other than Charles Hawtrey in fancy dress, the very fact that he's cast as an Apache being much of the joke.

Jim Dale is his usual likably daft self as the sanitary engineer mistakenly sent to deal with an outlaw gang because his first name happens to be Marshall, though considering what his profession is, there are far fewer toilet jokes than you'd expect, and non-regular Angela Douglas, standing in for the conspicuously absent Barbara Windsor, is rather sweet as the cutie who isn't anywhere near as helpless as she seems, but she doesn't get much chance to be funny. Overall it's a bit of a formulaic potboiler that obviously owes a great deal to recent box-office hit "Cat Ballou", and even more to the earlier and lesser-known "The Sheriff Of Fractured Jaw" (in which Sid James, not yet part of the Carry On team, played a low-down drunken varmint). The trouble is, those were both comedies, and when a comedy cannibalises two previous comedies, the law of diminishing returns is bound to apply.

In the end it's a decent enough Carry On series entry that does the usual stuff quite well, and far better than any of their increasingly sorry efforts from the seventies, let down by one appallingly bad performance. Though you'll need a good grasp of Cockney rhyming slang to get all the jokes, especially the ones the censor would have objected to if he'd understood them, such as when Sid James says to Kenneth Williams: "Don't you talk to me about ginger beer!"