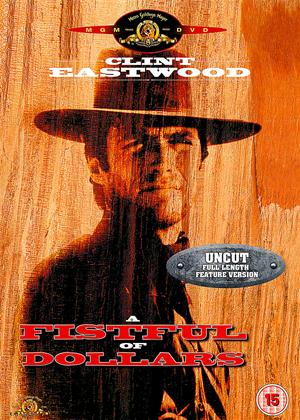 Reviews (2) of A Fistful of Dollars

Way back in 1960 it was common knowledge that 'The Magnificent Seven' was a remake of famed Japanese director's Akira Kurosawa's film 'Seven Samurai' – and that was all I knew. I'd never seen the original nor knew of any other of Kurosawa's films. And in 1967 when I first saw 'A Fistful Of Dollars' I appreciated it for what I saw on the screen – a taut, violent Western with a lone, laconic stranger (Clint Eastwood) arriving in a Mexican border town dominated by two feuding families, the Rojos and the Baxters, whose businesses are liquor and guns respectively. Stranger plays both families off against each other. Plenty of shooting, killing, fisticuffs and general mayhem ensues. Stranger leaves town. Err – that's about it. The film is short at 97 min, the storyline compact, the landscape suitably barren, the score unforgettable, the characters divided into goodies and baddies. Superb stuff – I liked it then and I still do, and it hasn't dated (but I guess that nowadays it would show bullet wounds and more blood).

But I didn't know that it was essentially a remake of Kurosawa's 1961 film 'Rojimbo' where a lone samurai comes to town and plays two sides against each other. And it was a lawsuit about this unauthorised remake that delayed the release of 'A Fistful Of Dollars' from 1961 when it was made until its wider release in 1967.

But I'm a little more versed in cinema now and have seen all (?) of the better known Kurosawa films and appreciate him as a great director. But don't let that take anything away from Sergio Leone, the master of the spaghetti western. 4/5 stars – highly recommended.

We all know the storyline from this, the first of the 'spaghetti westerns' - the moralistic stranger who has no compunction about killing or helping those in need but even after nigh-on 50 years, it is still a great film, with a superb musical score that leads you on to whistling it for most of the day! Most of the films from that genre have the same storyline but, what the heck. I defy any man to deny that he has seen himself in the Clint Eastwood role