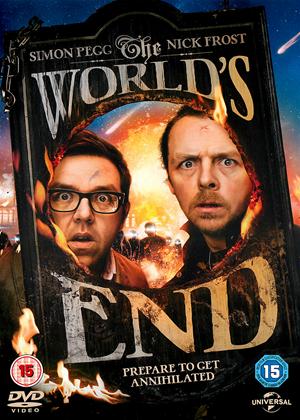 Reviews (6) of The World's End

I'm disappointed. This is the third film in an unofficial trilogy, the two earlier films being 'Shaun of the Dead' and 'Hot Fuzz' which are both excellent, so I was hoping - indeed expecting - a really good film. But no, it's disappointing stuff.

The central character is Gary King (played by Simon Pegg) who is not only a dislikeable loud mouth who has failed to move on from his teens when a pub crawl was the highlight of his adolescent life, but also appears to be an alcoholic drug addict recovering from a failed suicide attempt. His contemporaries (played by the always excellent Eddie Marsan, one of my favourite actors Paddy Considine, Nick Frost and Martin Freeman) have become successful and middle class, while poor Gary is stuck in the past.

Gary manages to persuade them to join him in recreating an epic pub crawl from 20 years earlier when they were young and foolish, and now all feel foolish - except Gary, seemingly stuck in his adolescence. As they return to their old haunts something seems to have changed - is it them? or is it that, in a bizarre attempt at turning this embarrassing mess of a film into a sci-fi comedy, the inhabitants of their home town have been taken over by aliens and turned into blue-blooded robots? Cue much shedding of blue blood and the end of civilisation as we know it.

Nope, it's not funny, it's juvenile. If you can ignore the minor fact that 'Invasion of the Body Snatchers' did it so much better some 60 years ago and that this film uses the boring town of Letchworth for its location shots (apologies if you come from Letchworth - but I have been there, and it is boring) then it is possible that you might find this mildly amusing rather than low quality drivel. The main problem is Simon Pegg's character (as I said, he's not very likeable) and a script that tries too hard to be too clever - and fails. There's also too much f-ing and blinding for my taste.

I really wanted to like this film, but it's not even amusing, never mind funny. 2/5 stars - very disappointing.

a nice surprise - The World's End review by CP Customer

I was growing a little bit tired of Simon Pegg and did not expect to like this but found it a surprising film. He plays a complete loser. An alcoholic, recovering drug addict and liar who is stuck in the past. I found it funny and poignant, as well as a nice commentary on pub chain blandness.

Not a patch on 'Shaun of the Dead' and 'Hot Fuzz' - didn't laugh once as the script writers failed to produce any 'gags' for the script and there was nothing funny visually. I sat hoping for something of the 'shaun of the dead ' standard and got nothing. That's 104 minutes of my life wasted which I can't get back.

The trouble we seem to have a law of diminishing returns:

Shaun of the dead - excellent

A shame as an excellent cast was assembled for this. I don't think this is bad film just not a good as its predecessors.

Call me juvenile but I liked it! - The World's End review by EW

I knew nothing of the Saun of the Dead connection etc (it was a long forgotten recommendation) and just took this film at face value. I found it very whacky funny and British...and that was even before the weird zombie bits! Yes lots of swearing and juvenile blokey sardonic humour, but strangely poignant too. I laughed a lot, although my husband didn't like it so much. I especially loved the soundtracks which helped get me in tune with the main characters euphoric/ manic mood!

I had high hopes for this film, having enjoyed the first two in the trilogy, but this was truly dreadful. It's repetitious, boring and just not remotely funny.

And finally, the Cornetto trilogy comes to an end, after nine years of horror homage’s coupled with a special brand of British comedy the team behind Shaun of the Dead and Hot Fuzz have reunited for the third and final movie The World’s End.

Starring, as ever, Simon Pegg and Nick Frost World’s End fits snugly beside the zombie plagued Shaun of the Dead and the Wickerman-esque Hot Fuzz by presenting a wonderfully British setting alongside a traditional horror/science fiction movie monster and exploring how the two can come to some kind of amicable completion.

Set in a small village somewhere in England the film sees a number of grown men, including Simon Pegg’s Gary King and Frost’s Andrew Knightley, returning home to re-enact an infamous pub crawl that took place twenty years ago and lives on in their memories as one of the best night’s of their lives.

From even its earliest trailers the World’s End was seriously reminiscent of the 1950’s imagery of pod people; individuals inhabited by or replaced with alien life forces that resemble their original hosts. Complimenting a monster stereotype that has become synonymous with a lack of emotion the film juxtaposes the ‘possessed’ villagers of King’s home town with a past time that could not be more British: the pub crawl.

There isn’t really much else one needs to say about the story behind the World’s End, the action and comedy carry the narrative most of the way, however they are helped considerably by the film’s excellent cast. Filled to the brim with famous British faces Pegg and Frost find themselves working alongside the likes of Bill NIghy, Pierce Brosnan and Martin Freeman, all of whom, as you would expect, put in fantastic performances.

There is something a little bit downbeat about the film by it’s end however, a feeling of the looming end that emanates from the characters themselves; aware that their youth is behind them they seem to have come together for one last hurrah, and much like the film itself, mark the ending of an era. Fans of Pegg, Frost and writer/director Edgar Wright, have been waiting for the final, green Cornetto for many years now – yet there is an edge of sadness found in its arrival. For many Shaun of the Dead marked a special moment in British cinema history and with the trilogy now over one can’t help but wonder how long it will be before another British comedy even comes close to the startling heights of it’s ingenuity and character. For this film truly marks the end of the world as recognisable, both as a Brit and as a cinema goer, to an entire generation of geeks and misfits.