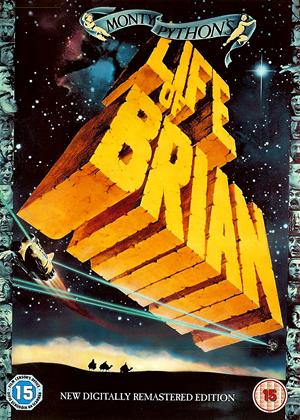 Rent other films like Monty Python's Life of Brian

I can quote whole screeds of this film. It is, simply, the greatest comedy of all time, and I have watched it countless times in the last 25 years.

Of course, there is controversy around it. A friend from university initially refused to watch it, understanding it to be a satire on the life of Christ. Eventually persuaded to 'try it', after I assured him that the film makes it very plain that Brian is NOT Christ, he ended up on the floor in tears of laughter.

A great stroke of luck for Monty Python was that they got the sets from Franco Zeffirelli's 1977 tv epic, Jesus of Nazareth which allowed this film to look a whole lot more authentic than Up Pompeii. Life of Brian is a series of sketches harnessed to the story of (an alternative) Christ. Its attraction is mainly twofold: it is an inspired and intelligent skewering of the characteristics of religious fundamentalism; and it is very funny. There is little characterisation save Graham Chapman's Brian, but there are some inspired performances, such as Michael Palin's Pontius Pilate, and John Cleese's Reg, leader of the Judean resistance. Brilliant comical scenes keep on coming, like the pessimistic, equivocal prophet, or the Roman soldier correcting the Latin of Brian's graffiti. I'm not usually an admirer of the work of Monty Python as a collective, but this is their absolute peak, and the hyperbolic reaction to the film's release (the BBC discussion between Palin, Cleese and Malcolm Muggeridge and the Bishop of Southwark was lamentably witless on the part of the offended Catholics) indicated that a national, or global conversation was long overdue.

Really enjoyed this when I was young. It has dated a lot for me. The kids thought it was "pants".

I believe this film had a bad press from some Christians when first released, but it is very funny and well worth looking at.

If you haven't seen it already, you're in great company (along with the other seven people on the planet).