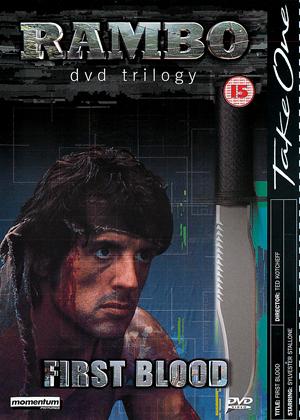 I had never seen a Rambo movie before watching this and I had wrongly assumed that this movie franchise was going to be a boring action movie. After watching this movie I think it was of my all time favourite 80s movies. It explores Rambo's struggles with returning from the Vietnam war. His country used and abused him and then forgets about him, and he stumbles upon some small town cops who abuse him for being a drifter. Rambo is suffering from some sort of PTSD in this movie and as a result the abuse of his captors causes him to snap. This movie is a much deeper commentary on the state of affairs at the time than I had ever assumed it to be. Rambo is also a pretty badass character. Highly recommend. Although I hear the later movies in the franchise aren't really like this.

Last time i watched it was over 20 years ago and having just watched the final Rambo film thought id treat the Wife and Son to the film that started the ever worsening franchise.

Now im older and more critical, plus with all of the high budgets and learning from past films we have now you have to wonder if a film of this vintage can stand up at all, let alone be compared to modern action films.

But this is one oldie that comes out fighting with moves long since forgotten.

Its just fantastic, Im no fan of Sly but he is just brilliant in this. And Brian D is superb, while Sly does the arm flexing Brain is flexing his acting muscles and even my 9 year old son pointed out what a top job he was doing.

Throughout the film there are reminders of the trauma Rambo has gone through - and his breakdown at the end adds a depth and emotion you just dont expect from a film like this.

On this pass i also noticed something i didnt see before - check behind the sheriffs desk. There is more to this film than meets the eye.

And we dont get shakey cam action from actors who cant fight. Action here is short and blunt. It lacks some of the polish you get today - but its to the point and avoids being naff. Action is actually limited with good amounts of dialogue in between and its this dialogue that probably makes the film so special. It even throws in some dry humour.

This is a lesson in how to make a film of this type. I never have and never will compare modern films to this, its just not fair. They dont stand a chance.

Sadly this doesnt apply for the other Rambo films. This is First Blood, leave it at that!

So 20+ years after i first saw this film and its better than i remember. Awesome stuff.