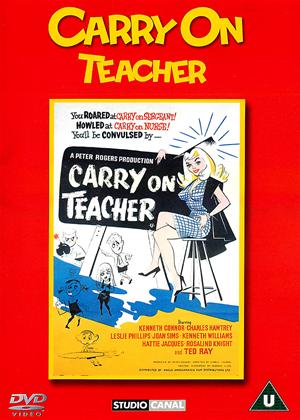 Reviews (2) of Carry on Teacher

The third Carry On film is as good a comedy treat as the first two films. Here the theme is focused on Britain's education system, run with an emphasis on discipline as much as learning like much of society at the time. Britain is rich with school based comedy in literature, comics, TV and film, much of it farce, with the children played as more deviously clever than the staff. You only have to think about Billy Bunter, Please Sir! and St Trinians for example, indeed Carry On Teacher has opening and closing credits that are very similar to those in the St Trinian films. This film follows the same narrative pattern with the pupils attempting to sabotage a visit by a Ministry Inspector accompanied by a child psychologist using dirty tricks, booby traps and pranks. Ted Ray joined the cast, for his one and only Carry On role, as the Headmaster of an urban Secondary Modern school. He covets the top job at a new school but needs to make a good impression on Miss Wheeler (Rosalind Knight - a great underrated comedy actor) from the Ministry during her inspection. The pupils led by Stevens (Richard O'Sullivan - of Man About The House fame) intend to foil this at all costs. There's plenty of laugh out loud moments, some silliness and bawdy jokes (The emphasis on the word 'cock' created a bit of a furore). Cast members included Kenneth Williams, Kenneth Connor, Leslie Philips, Charles Hawtrey, Joan Sims and Hattie Jacques who were now becoming expected members as this film really kicked off the regular Carry On series. A nostalgic treat and a great addition to this series before they went totally over the top.

Carry Ons, the formula - Carry on Teacher review by BN

I've seen several Carry On films recently, dotting about with their dates (early vs. much later ones) looking for a bit of light comedy to brighten up the days after a lot of heavy dramas but t.b.h. I didn't find this all that rib-tickling funny. I thought people in the cinemas doubled over with these? There were a few amusing bits but....

Lots of the school age children were up to cheeky antics, trying hard to scupper the promotion of their headmaster Ted Ray who wishes to defect to another school.

It was the 3rd of the Carry On - series (30 films, 1958 to 1978) and just getting going with its regular, much recognised cast and sending up particular professions or themes (ie: doctors, dentists, police, schools, westerns, horror films, and historical episodes) - but the best part to my mind was the Commentary in Special Features, narrated by 3 of the teenagers at the time: Richard O'Sullivan, Larry Dann and Paul Cole. The insights into the 1959 filming, the crew, Pinewood studios, the general set camaraderie, and frankly having a lot of fun in a more innocent time, were far more fascinating than the film.

Worth watching for that alone.