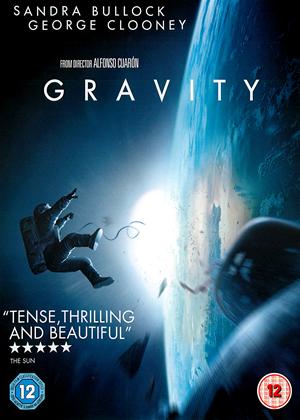 Spectacular graphics - but everything else is awful - Gravity review by RP

I saw 'Gravity' twice in 3D at the cinema, the second time on an evening out with friends. Frankly, having seen it once, seeing it a second time wasn't my choice.

Now here I am at home watching it for a third time, in 2D on a modest 40" screen and from a DVD copy rather than the higher resolution of Blu-ray. And my opinion hasn't changed.

'Gravity' has spectacular CGI special effects. I can only begin to imagine the huge amount of compute time required to generate the film. Seen on a big screen, the film is visually spectacular and the 3D effects do add something - unlike other films I've seen in 3D.

So, spectacular graphics - but everything else is awful. The physics is silly, the spaceflight sequences look good but are unrealistic, the script is truly dreadful, and the so-called 'acting' by big ticket names George Clooney and Sandra Bullock is embarrassing.

It's won 7 Oscars. That is impressive - but then other than Best Director you realise they're for cinematography, visual effects etc - with nothing for script, acting etc.

See it on the largest screen you can (IMAX 3D if poss) but as a home small-screen experience it's well below average. See it out of curiosity - and unlike for example '2001: A Space Odyssey' I predict that it won't be in anyone's list of the best space / sci-fi films in 45 years time.

No, I didn't like it. I'll give it 1/5 stars then add another one for the excellent visuals, making 2/5 stars.

As a viewer I was never immersed in the film due to the lacklustre acting and disappointing script.

Overall conceit held it together though so worth a watch.

Gave up after 40 minutes. No characterisation, dialogue about as interesting as listening to a couple of 12yr olds inanely bantering about nothing.

Clearly not intended for viewing by adults it seems odd that it's classified 12 & over.

87 minutes of awesome suspense and stunning cinematography. This film utterly deserves best visual effects and cinematography. The most ridiculous of the others is score. It is backing music for space scenes. Tubular bells would have been good but cellos scratching long notes is not. The physics is dreadful, the most notable is when the pod fires jets forward in order to go forward, I laughed out loud. The aurora borealis is more impressive on youtube clips from the NASA space-station. I note the other reviewers scorn of the acting but they are in space suits most of the time so it is mainly voices. I put these negatives behind me however when I scored the film on its imagery and suspense which are truly glorious.

Good'ish film but sound mix was very poor. Too loud music way too often, drowning out the dialogue, which also went from loud to quiet.

If you want to see a good film, watch Captain Phillips. Now there is an exceptionally good film.

I despair at American popular cinema. The scriptwriters for these so called 'blockbusters' seem to constantly rely on visual stimulus to the almost pathetic attempt at generating any emotional drama. Result - yet another boring, unemotional, ridiculous storyline to create a disaster movie for the sake of creating a disaster movie! American independent cinema can be so much more interesting.

We did watch it to the end, but by the time we got to the end we wished we'd done something else with our time. Totally boring.

Film has little storyline and is unrealistic. There is no way could anyone survive this situation. However good the special effects are, you just cant get past the unbelievable story line.

The film is also very short for a motion picture

In Space no-one can hear you yawn!! - Gravity review by CP Customer

OK, so the visual effects are great; worthy of the odd BAFTA and OSCAR but the dialogue is poor and drowned out by the music. Perhaps George and Sandra do have something of value to say but I didn't catch much of it.

As for the action; really enough spinning, we get the message the first time around that you don't tend to fall through space in a straight line. About 20 mins in, you get to the stage where you just can't wait for the space debris to orbit around again and this time hoping that it will finish them off and put everyone out of their misery. We don't have to wait an actual 90 mins do we?

Finally, Ms Bullock, if there is a Gravity 2 - pay more attention in Astronaut School - Chinese and Russian are the languages of choice in the space programme apparently - but I won't be watching another one of this. Apollo 13 it is not.

I only give it 2 stars because of the visual effects.

You can't varnish a dump - Gravity review by JH

If cgi is for you, this movie is wonderful. If you like watching characters you can believe in, and empathize with, forget it. For credibility, it doesn't get out of the blocks. The most clunky script I have heard since Raquel Welch in one million years BC, or whatever it was called. How come the makers of this film spent so much on cgi, and forgot the basics?

It’s been seven years since Alfonso Cuaron’s last feature film, the dank and grimy Children of Men, a film that tested to what extent technical special effects could be used in a single shot as Clive Owen dodged explosions and gunfire through ruined streets of a dying world. Gravity removes itself entirely from this kind of material but it doesn’t stop trying to push the envelope in terms of special effects. While Gravity uses much more CGI, it’s the way its used and the story it helps tell that really stand out.

Gravity follows Dr Ryan Stone (Sandra Bullock) on her first mission into space. However when things go drastically wrong she finds herself stranded in the void with veteran astronaut Matt Kowalsky (George Clooney). Tethered to each other and with limited oxygen, the two must find a way to survive and hopefully get back down to earth.

While a series of complex twists complicate their journey, Gravity is really a personal story about overcoming horrors. Bullock’s Dr Stone is a woman scared of her own shadow, full of fear and afraid of life. The film tests her character to no end as she reexamines her reasons for being on the mission in the first place, something that has brought her only more pain and suffering. Bullock makes Stone sympathetic and even a little heartbreaking as her justification for this mission comes to light.

Clooney’s Kowalsky on the other hand is a unrelenting optimist, a professional with a rebellious edge that serves him well. He lives to protect his crew but never loses sight of the mission as the two hurtle all over space on their search for rescue.

Unbelievably real with nary a bad shot in the entire film, Gravity is a seamless marvel of physical performances and beautiful computer graphics that have been melded together to make a tale anyone can relate to in some way while still having the added bonus of being completely out of this world.