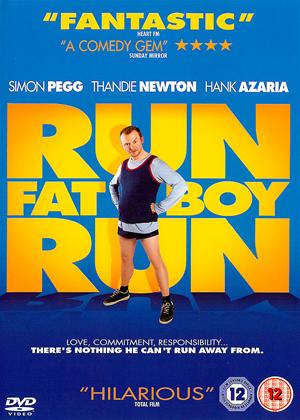 Synopsis:
Five years ago Dennis was at the altar about to marry Libby, his pregnant fiance. He got cold feet and run for the hills and he’s been going in circles ever since. When Dennis discovers Libby’s hooked up with high-flying-go-getter Whit, he realises it’s now or never. He enters a marathon to show he’s more than a quitter, but then finds out just how much sweat, strain and tears it takes to change. Nobody gives him a chance but Dennis knows this is his only hope to be more than a running joke.
Actors:
Simon Pegg, Thandie Newton, Hank Azaria, Dylan Moran, Harish Patel, India de Beaufort, Matthew Fenton, Simon Day, Ruth Sheen, Tyrone Huggins, Nevan Finegan, Iddo Goldberg, Ameet Chana, Chris Hollins, Denise Lewis, Lorna Gayle, Gabriel Fleary, Pandora Colin, Stephen Merchant, David Walliams
Directors:
David Schwimmer
Writers:
Michael Ian Black, Simon Pegg
Studio:
Entertainment In Video
Genres:
British Films, Comedy, Romance
Countries:
UK

Simon Pegg's titular character is hardly obese, merely a little portly around the midriff. With superb one liners holds this little predictable but amusing film together.

Five years on from a wedding-day panic that saw him leaving pregnant Thandie Newton at the altar, he’s now working as a lowly security guard. The arrival of smoth financier Hank Azaria in her life gives him cause to get fit and win her back, by taking on a challenge of running head-to-head with Hank in London’s latest marathon. It does seem an unlikely route to redemption, given that the Hank is a marathon regular.

Asian landlord Harish Patel filling in the gaps, and bonding opportunities with his son i suppose intended as emotional undertow.

A very funny film, but cringingly so in places as Simon Pegg's character Dennis is so immature. He manages to lose his beautiful girlfriend to a hot shot American, then sets about winning her, and his son, back by running a marathon. Quite charming and sweet. Dylan Moran, as his best friend, packs in a few laughs, as do his Asian neighbours.

I really enjoyed this film and would compare the humour to Hot Fuzz (although not as "silly" - at the end) - Simon Pegg is a great English comedy actor and it shows in this movie.

Simon Pegg plays Dennis who is lazy and arrogant until he realises what he has lost (his pregnant Fiancée - after chickening out on his wedding). However when she gets with a new man - a "perfect" American hunk - he tries to compete by entering the London marathon - and to prove he can actually finish something.

I don't know why but the plot reminds me a little of Mrs Doubtfire - probably because of the child element and the "perfect man" to compete with to win back his ex.